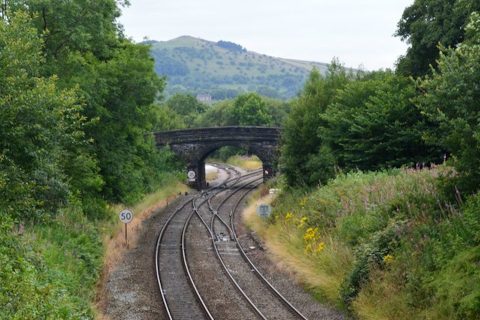 England’s Hope Valley to be upgraded

Published on 16-03-2021 at 09:31
The Hope Valley Line across the Peak District in the north of England connects Sheffield and Manchester

The UK government has rubber-stamped a 137 million pound investment (153 million euros) for the Hope Valley line. The route is the major mixed-use connection between the cities of Sheffield and Manchester, and also serves as an economically critical east-west connection across the north of England. Limited capacity and anticipated passenger traffic growth has hampered freight development, but this improvement programme will provide passing loop capacity for faster traffic to overtake freight services on the predominantly twin-track line.

Although this plan has been part of the overall investment plans of infrastructure agency Network Rail for some time, the UK government’s Department for Transport has now announced its approval of the overall Hope Valley capacity enhancement scheme. The government is keen to deliver on its ‘levelling up’ agenda, an overall ambition to improve economic activity in the north of England, and they say this project will improve connectivity between Sheffield and Manchester and remove bottlenecks on the line by creating places for fast passenger services to overtake slower moving freight trains. Works will take two years to complete.

Network Rail speeding up the project

Network Rail is now finalising detailed designs that will improve sections of the railway between Bamford station and Jaggers Lane Bridge in Hathersage, and around Dore & Totley station, where a second platform will also be added. Work is expected to begin in 2022 and will be completed in 2023. Network Rail has already started work on the design stages of the programme.

The infrastructure management agency recently began implementing its ‘project SPEED’ structural streamlining, intended specifically to make projects like this more efficient and faster to implement. That has met with approval from government sources. “I am delighted to confirm 137 million for this scheme to remove bottlenecks on the Hope Valley line, transforming journeys between Sheffield and Manchester, two dynamic Northern Powerhouse cities”, said rail minister Chris Heaton-Harris. “We are committed to levelling up infrastructure across the North, and these important upgrades will make a huge difference, providing the punctual, reliable services, as we build back better from COVID-19.”

Capacity between Sheffield and Manchester has been an ongoing issue for decades. The controversial closure of alternative routes, as part of the rationalisation of the 1960s, limited rail’s ability to compete for freight traffic, at the very same time as a huge motorway project across the mountains that separate the two cities was underway. There has been significant lobby from the freight sector ever since, to improve the remaining routes, particularly the Hope Valley, which has become a by-word for the capacity issues that affect the North of England.

“This line has suffered for years with slower trains holding up faster ones, leading to cancellations, delays, and unreliable services”, said David Hoggarth, the strategic rail director at Transport for the North, the, the sub-national body charged with overall improvements to communications links between the communities of the region. “It currently has some of the slowest train speeds on the North’s rail network”, he observed. “It’s great news that investment will now go into this vital corridor, whilst longer-term upgrades as part of Northern Powerhouse Rail are finalised.”

Initially, the investment will help remove some of the key rail bottlenecks on the line by providing two vital freight passing loops, and a second line through Dore and Totley station on the western edge of Sheffield. The intention is that the additional capacity will provide for improved passenger frequency, without compromising freight traffic, which will be more efficiently handled under the revised layout.

Network Rail say they are already engaged in signalling design work at the same time as the tendering process, and talking to both passenger train operators and rail freight companies about changes to the network that may be needed during construction.

The three bodies – the Department for Transport, Transport for the North, and Network Rail – are collaborating as part of the wider Manchester Recovery Taskforce, which is looking at a range of options over the coming decade to improve performance in and around Manchester. These include the already implemented Ordsall Chord just west of Manchester Piccadilly station,  and the massive congestion issue of the Castlefield Corridor, which links that project with the Hope Valley line.