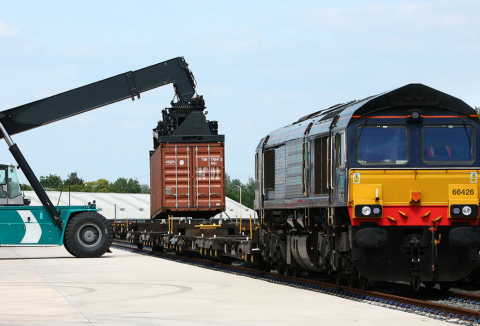 The Rail Freight Group (RFG) believes the UK Government’s draft transport plan for the north could be a springboard for large-scale modal shift to rail.

It was responding to the proposals set out by Transport for the North’s (TfN), a 30-year rail and road upgrade scheme which ministers have hailed as ‘revolutionary’. It includes a blueprint for developing the rail network across the north of the UK for freight and passengers.

The plan says: “Rail freight analysis shows strong growth in north-south routes as well as east-west routes. These routes are popular with passengers and freight because they are direct and they provide access to key ports and markets. These routes are already short of capacity, with conflicts between passenger and freight movements.”

TfN estimates the the plans will cost around two or three billion Pounds per year to implement, but could in the long term boost the economy by 100 million Pounds and create 850,000 new jobs by 2050. It has identified seven strategic development corridors across the north where it will focus on improving transport infrastructure. These corridors link important ‘prime capability’ assets and important economic centres that are currently in need of improved connectivity. These include the freight & logistics sector serving businesses via ports and inland distribution centres, such as the new iPort intermodal terminal in Doncaster (pictured).

TfN adds that it has developed a ‘high-level intermodal freight tool’ which models the benefits of modal shift between road and rail. “This a ground-breaking tool and will change the way the north think as TfN builds future business cases, including the role of the freight network in supporting the delivery and operation of major strategic developments across the North,” says the plan.

Maggie Simpson, Executive Director of the RFG, said: “Transport for the North have recognised that businesses in the north of England want to use more rail for transporting their goods, between ports and consumers and into rail linked warehouses, quarries and production facilities. These plans for upgrading the railways and for large scale modal shift to rail are therefore good news for rail freight operators and customers.

“In particular, the plan confirms support for the upgrade of the north Transpennine route, where development work is currently underway. We have been working to ensure that capacity and gauge for freight is fully incorporated as a core part of the work, and this must now be urgently confirmed as this vital project moves forward.”

John Cridland, Chairman of TfN, said: “Transport for the North has for the first time outlined its emerging vision for Northern Powerhouse Rail, a rapid, reliable and resilient rail network between the North’s six biggest cities and other economic centres. This is accompanied by an updated Rail Strategy for investment in the North’s existing lines, stations, services and franchise operations, reflecting the planned integration of Rail North into Transport for the North in April this year.”

Stephen Joseph, Chief Executive of Campaign for Better Transport, described the plan’s emphasis on rail was ‘long overdue’ given the decades of underinvestment in rail in the north of England. “We now need to see the inter-urban investment in the plan matched by investment in local transport across the region, both in rural as well as urban areas, so that no community is left behind,” he added.