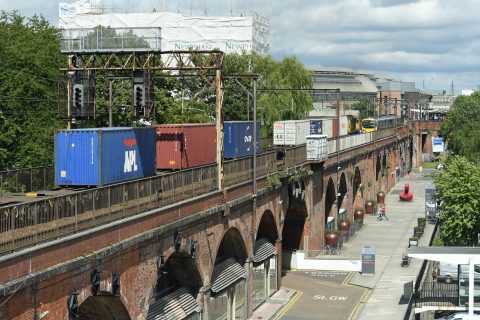 An alternative proposal has been tabled to relieve congestion in Manchester’s notorious Castlefield Corridor. The short section of twin-track across the south side of the city centre is running at over capacity, and it is the subject of delays for passenger and freight traffic over a wide area of the North of England. Rebuilding is on the agenda, but at huge cost. Now an affordable proposal has been tabled, which would take pressure off the section, and could be achieved with much less disruption to services.

Ideas have been put forward, backed up by initial planning and feasibility work, to re-route some freight traffic away from the Corridor, and provide diversionary options, initially for the fast-growing intermodal rail freight sector, but also to revive options for other industries to use rail in and around Manchester. Industry sources say that a revived link though the southern suburbs of the city would allow better access to existing facilities and stimulate new flows across the region.

A view of the wider benefits

Jonathan Moser, managing director at specialist consultancy Railfreight Solutions, was approached by national lobby group RailFuture to examine in some detail a proposal to reactivate some of Manchester’s legacy of industrial rail routes, as an alternative to a hugely expensive and disruptive redevelopment through the city centre. “The primary objectives of the scheme are to release capacity along Manchester’s ultra-congested Castlefield Corridor”, he said. “At the same time, the scheme would seek to increase Greater Manchester’s existing container terminal capacity which feeds not only the North of England’s primary business destination but also the wider North West region.”

Moser more than most is aware of the wider implications of unlocking the network around Manchester, and particularly the Castlefield Corridor. He is currently looking at the track layout at Ely, which constrains not only North West destined traffic from Felixstowe, but also that to the Midland and Yorkshire, the three principal destinations for container traffic from the deep sea ports of Felixstowe, Southampton and London Gateway . “For Felixstowe-North West intermodal traffic, together with the Felixstowe branch, Ely represents one of the most contentious  bottlenecks after Castlefield”, he says.

Working closely with Railfuture over several months, Railfreight Solutions has developed a high level business case for a proposal to provide an alternative route, primarily to the existing Trafford Park terminal, for intermodal trains arriving from the deep sea ports. At the moment, all these flows come through the congested Castlefield Corridor, which they share with a mix of suburban, inter-urban and long distance passenger trains, transiting bulk and intermodal flows, and infrastructure workings. Although only a matter of a just under two kilometres long, the Corridor is a throttle on several lines from the east, and congestion has been exacerbated ever since the opening of the Ordsall Curve, which permits more traffic from the west of the section.

The Ordsall Curve, with its stylish bridge, was intended to make cross-city transit possible for the first time, but it has only served to further frustrate operations along the Corridor. Plans have been tabled to add passing loop platforms, possibly at all three intermediate passenger stations, and even to add a double-deck section since additional land is at a premium. The likely addition of HS2 services into a redeveloped Piccadilly station is a headache waiting to happen for rail planners in the area. However, the scheme originally worked up by Railfuture with the necessary business input from Moser relies on reactivating under utilised infrastructure in the south of the city, rebuilding a short section of abandoned line, and three modest sections of new track, totalling little more than three kilometres, to make a new route, completely avoiding conflicting movements along the Corridor. “There is a considerable investment already made by rail freight operators, which is restrained by the congestion on the Corridor”, he says. “This scheme lets all those investments be realised to the full, and more besides.”

Among the prime beneficiaries would be the Maritime-operated Manchester Euroterminal at Trafford, which Moser believes is operating well below capacity, and the neighbouring Freightliner facility at Trafford Park, currently accessed from the east via the Corridor. A short spur from the west, the most modest of those three new alignments, would radically change the attractiveness of the terminal. Jon Bunyan, the general manager at Freightliner Group, responded positively on social media. “Looks good”, he said. “Hopefully it would be fitted with OHLE to allow freights hauled by AC locos as we do now to Trafford Park.”

Wiring up the project would, as Bunyan alludes, make sense, and play up to the government-backed carbon reduction targets for transport infrastructure and the wider economy. The new route would, admittedly, run though the leafier suburbs of south Manchester and Cheshire. Put that together with the pace of development in central Manchester, and the likely addition of an HS2 station at Piccadilly, and there is still a case to be made for even the more ambitious proposals for the Corridor itself.

The costs of solving the Castlefield Corridor with direct interventions have been estimated into the billions. By comparison, this southern alternative seems a bargain basement alternative. “The estimated broad brush cost of the project, even under the existing pricing regime, would be up to 400 million (440 million euros)”, says Moser, “including full electrification at 25kV”. “Network Rail have put a value of freed up capacity at 750-800 million (830-890 million euros), which would amount to a benefit to cost rail of 4:0.”

The rail freight businesses best placed to benefit from this proposal are all within sight of Old Trafford, but will Manchester be united behind a new freight route through the south of the city? It seems an open goal, and to dismiss it would surely be an own goal by comparison.

This is by far the best proposal I have seen yet for this. It needs OHLE for sure (despite resistance from politicians). This would provide impetus for electrification of the CLC route to Liverpool and the Stockport to Chester line which could then trigger electrification eastward. A freight connection for Carrington Park is a must as the link road to the M60 is full of lorry convoys to/from the SAICA Paper mill that could easily make trainloads. There’s also a biomass burning power plant.

I agree with Gremlin X – a much needed strategic investment.

This is the best solution for the area. Why has work not started on it?