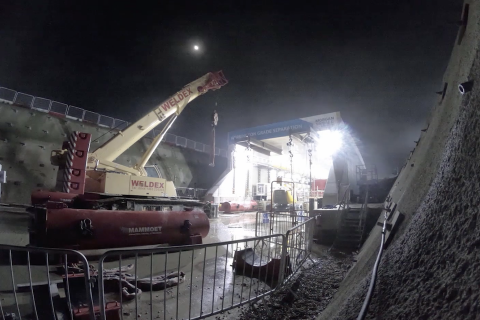 Swift, Pragmatic and Efficient Enhancement Delivery. That is both the message and a new initiative called SPEED, backed by the UK government and developed by Network Rail, the UK infrastructure management agency. The project has the endorsement of Prime Minister Boris Johnson, who claimed that the UK is in the middle of the biggest railway investment programme since the Victorian Era, and needs to move faster. He said that with so much of the UK infrastructure antiquated, investment in rail was critical to the economic recovery of the UK, and in delivering his ‘build back better’ agenda.

Johnson was backed up by his rail minister, Chris Heaton-Harris, who confirmed his government colleague’s statement. Both representatives of the from Westminster were speaking in front of an online audience of over 2,400 professionals in the sector, assembled by the Railway Industry Association. The RIA, the body representing the supply chain at large, has embraced project SPEED as a means of accelerating the implementation of rail projects, such as the preparation for mixed traffic of the Ashington line in North East England, and the building of a reinstated line in Devon in the South West of England.

Modernisation of our network

Prime minister Boris Johnson has been campaigning since the beginning of the pandemic to restart the UK economy, under his broad banner of ‘build back better’. The online address, given on Friday, was an opportunity for his rail minister Chris Heaton-Harris to outline a commitment to rail development. “The railway is absolutely critical. Businesses cannot compete and prosper if it is difficult for goods to move around the country. That’s why we have an obligation and a business imperative to get on with the modernisation of our network”, he said.

A programme of briefings is being rolled out to Network Rail staff and the rail industry at large. For this purpose, Project SPEED has been given ten key indicators to deliver what the government calls UK railway development that is more affordable and faster.

PACE is the newest acronym: “Project Acceleration in a Controlled Environment”. It is a concept designed to replace the existing “GRIP” framework (Governance for Railway Investment Projects), which is widely acknowledged to be rigid and inflexible, and a cumbersome process, often resulting in duplicated effort.

Half the time and cutting costs

Heaton-Harris made specific reference to two projects, at opposite ends of the country. On the Ashington and Newcastle line – connecting a number of former industrial towns with the biggest city in the North East – mixed traffic will be reintroduced to an existing freight line. This will require extensive capacity and infrastructure upgrades, to accommodate a half-hourly passenger service, alongside existing and anticipated freight flows. The minister emphasised that rail will play a vital part in the economic recovery of the UK, as long as it demonstrates value for money. “We will create a more robust and resilient railway better prepared for the challenges ahead.”

A project that may prove more challenging for the minister’s intention to half the time of completion while cutting costs is the reinstatement of the line westward from Okehampton, across Dartmoor in the South West of England. When completed, the line will provide a robust alternative to the coastal route – famously and repeatedly washed away at Dawlish sea wall in recent winter storms.

This Network Rail initiative may cut across the findings of the much delayed Williams Review – an examination of the railway industry as a whole.“I hope there will be plenty to talk about in the next few weeks”, Heaton-Harris said, without committing to the publication in that timescale.

“Project SPEED is showing what we can do, what is possible when we work together”, he said. “With hundreds of rail projects currently underway across the industry, the potential is absolutely clear.”

The evidence base, says the minister, will be demonstrated very visibly by what goes on in the Northumberland line and the Oakhampton line. He told delegates that the coming weeks and months will show the scope of projects that are achievable. With the Williams Review, the Union Connectivity Review and a raft of government statements all due – including the UK Budget this week, there is be plenty need … for speed.

Lower costs as the railway becomes more advanced will be on the agenda at RailTech Europe 2021 Live 30 March – 1 April). Registration for the free online event is now open.