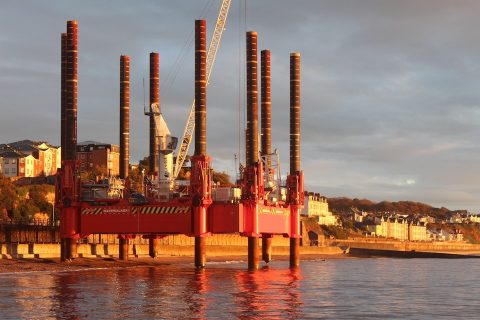 Network Rail and contractors are all at sea as work begins on the defensive works to protect a vulnerable coastal main line in southwest England. The sea wall at Dawlish, in Devon, is being hugely upgraded to prevent damage from increasingly frequent and violent storms. A new, bigger retaining section will provide greater protection to the railway and to the town from rising sea levels and extreme weather for generations to come, says the agency.

The railway in the south west of England, which hugs the coast between Exeter and Newton Abbot, has been frequently put out of action in recent years, due to storms damage. Most spectacularly, the line was washed away in 2014 by a winter storm, which closed the line for several months, cutting off the naval city of Plymouth and the entire county of Cornwall. The line has periodically closed ever since. No alternative routes have existed for over fifty years, since a widespread rationalisation of the UK railway network closed any alternatives in the region.

Network Rail is now one week into a two-year project, the second section of the new sea wall at Dawlish, which they say will help protect the vital rail artery for next 100 years, and give shelter to the adjacent seaside town. Construction of this section of the 80 million British pounds (88 million euros) project, will take around two years to complete. The infrastructure agency has consulted with a number of specialist engineering experts, including world-leading marine, coastal and railway engineers. Work on the first section began almost a year ago.

The section currently underway is the iconic view from Dawlish station, east to the Coastguard breakwater. When complete, in late 2021, attention will turn to the section between the station and the Colonnade breakwater to the west, and will link up the new wall at Marine Parade. A major aspect of this work involves the use of a Wavewalker, a self-contained jack-up barge, the only one of its kind in Europe. This project is the first time this type of barge has been used to maintain the UK rail network. The equipment is now in place at Dawlish as pictured above.

This Wavewalker will be used by contractors BAM Nuttall to safely access the sea face of the railway embankment, and significantly extended the hours available for work, which would otherwise be curtailed by tidal conditions. “The railway in Dawlish is uniquely positioned, leaving it enormously exposed to the worst weather that the English Channel can produce”, said Huw Jones, divisional director rail, for BAM Nuttall. “The jack-up barge allows us to work safely on the foundations of a new sea-wall on a 24-7 basis, regardless of tides. Using the Wavewalker to deliver this phase of work means we can complete the work more cost effectively, whilst significantly reducing the time that this work impacts the local community.”

Alternatives would be more expensive

Public pressure and extensive consultation has resulted in a design that will retain the icon walkway adjacent to the tracks. Once complete the 415 metre section of new sea wall will be higher than the existing wall; have a curved edge to send waves back towards the sea; have a high-level, wider and safer promenade; pedestrian access to the beach and an accessible station footbridge with lifts.

Network Rail says the new sea wall is vital, not just for Dawlish but for the whole of the South West peninsula. Despite the project, campaigners have lobbied for an alternative route to be reinstated, via an inland route, which would also reconnect intermediate communities to the network. However, despite being a more resilient solution, the capital costs would be far higher than strengthening Dawlish.