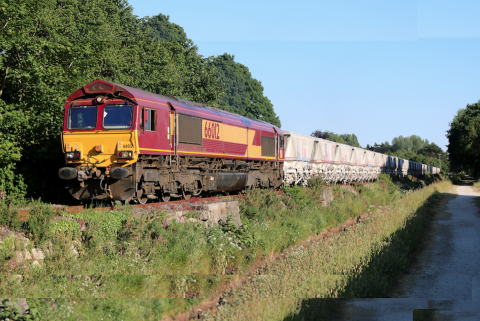 Imerys, the French owners of china clay extraction interests in Cornwall, has signed a new two-year contract with DB Cargo UK. The deal extends the relationship between the mining company and the rail freight operator, and will keep around 11,000 heavy goods vehicles off the roads in South West England.

DB Cargo UK has been awarded a new, two-year contract to transport china clay on behalf of minerals specialist, Imerys. The rail freight operator’s head of sales, Roger Neary, said they were proud of the long-standing relationship with Imerys and looked forward to continuing to work with them. “Rail freight provides a faster, more efficient and environmentally-friendly method of transporting materials of this kind, reducing congestion on the UK road network”, he said.

The French-founded multinational has been the owner of china clay mines in Cornwall since acquiring the business of English China Clays in 1999. Ashley Shopland, representing Imerys in the UK, was clear that rail represented a reliable and environmentally sustainable means of moving bulk cargo around and out of the South west of England. “Imerys is pleased to have secured ongoing rail movements for its products in and around the St Austell area and up to Cliffe Vale, combined with a continuation of the strong relationship that it has built over many years with DB Cargo UK”, he said.

Moving bulk loads in Cornwall is challenging for rail. The terrain is often steeply graded and the open cast mines are often located in locations remote from main line access. Nevertheless, the two industries have good relations and the legacy of a once extensive regional rail network serves both clients and carriers well.

Cornwall, in the far south west of England, is popular for its warm climate and coastal scenery. It is a premier holiday destination in the UK. However, the railways came to this part of the country primarily to serve industry. Above ground farming and fishing, but the area is rich in minerals too. There was an extensive tin and copper extraction industry here, which only ceased in the late 1990s. It has, however, for more than two centuries, been a globally important centre for the extraction of china clay, a versatile mineral deposit, used in a wide variety of processes, from the manufacture of porcelain, to paint additives and paper products.

DB Cargo UK operates two separate traffic flows for Imerys. There is a relatively short trip from from Goonbarrow and Branch to Fowey Docks for raw materials export; and from Cornwall to Cliffe Vale in Stoke, in the appropriately named English region of The Potteries. Every week the rail freight company transports in the region of 7,200 tonnes of china clay for Imerys in covered hopper wagons, removing around 11,000 lorries a year from the Cornwall road network.

Beneficial to the Cornish economy

Imerys has signed the new contract despite the coronavirus pandemic, and severe uncertainty in their markets. However, Alessandro Dazza, the chief executive, had a note of optimism for the future, echoing the sentiment of his colleagues in the UK. “Our results in the first half of the year support our confidence that Imerys’ business model is adaptive and resilient, even under the most challenging circumstances”, he said in the company’s latest financial statement.

Given the extent of the usefulness of china clay in a wide range of processes, it is also likely that this continued partnership between Imerys and DB Cargo UK will prove beneficial to a part of the Cornish economy that is often overlooked, but set to play an even more important role in the future of the region.