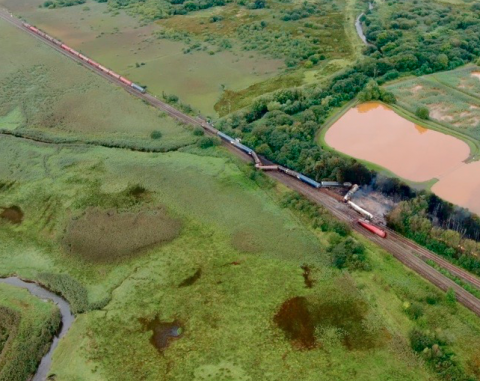 It has taken six months and the cooperation of agencies from all across Wales to rectify a derailed train, wrecked rails, a massive fire, an oil spill, and an environmental disaster on the railway line through Llangennech, in South Wales. The disaster could have been on a par with the Sea Empress grounding in 1996, the effects of which are still being measured twenty-five years later. But it did not.

An environmental disaster has been averted, say Network Rail, as the railway reopens at site of diesel freight derailment at the height of last summer. The UK railway line through Llangennech has reopened for the first time in six months, following a huge environmental recovery effort.

The southern end of the Heart of Wales line, which runs from Shrewsbury on the English side of the border to Swansea, has been closed since August last year, after a freight train, pulling 25 wagons, derailed while passing the Carmarthenshire community of Llangennech, on the edge of Llanelli. The resulting fire threatened homes in the neighbourhood, before around 350,000 litres of diesel spilled into the ground, causing major concern for the surrounding wildlife conservation area and waterways.

Since then, ground teams from Network Rail, Natural Resources Wales, Adler and Allan and partner agencies have put in a total 37,500 hours of work to protect the local environment, remove the ten derailed wagons from the site and repair a large stretch of damaged railway infrastructure. Even more challenging has been the removal for safe disposal of 30,000 tonnes of heavily contaminated soil, and its replacement with locally sourced and environmentally compatible quarry earth.

Far-reaching impacts on the environment

In the final few weeks of the recovery, Network Rail worked to fit around 530 metres of brand-new track before reinstalling the signalling, damaged in the fire. Freight services started back on the railway line through Llangennech late on Friday 5 March, with a currently reduced passenger service following on Monday 8 March. “I am delighted that we have reached the final stages of our work to reinstate the railway”, said Bill Kelly, Network Rail Wales route director. “It is thanks to our quick-thinking frontline teams, along with our partner agencies, that the fuel spill was able to be contained so swiftly, allowing us to prevent what could have been a total environmental disaster.”

The environmental agency Natural Resources Wales, who compared the scale of the incident to the Sea Empress disaster of 1996, will continue to monitor the sensitive flora and fauna over the coming months. “Llangennech is a huge complex, challenging and ultimately successful recovery operation at a location of international environmental significance, coordinated by Natural Resources Wales”, said Martyn Evans, Chair of the Recovery Coordination Group. “There have been far-reaching impacts on the environment – on land and in the sea, the community of Llangennech, local businesses, particularly the shellfisheries, tourism and industry. Support is on-going.”

Reopening of the line means an end to disruption and diversion for oil supplies from the refinery complex at Milford Haven in the far west of Wales. Friends of the line have welcomed the reopening, and ongoing works further north. Monitoring of the site and wider environment has been ongoing to ensure the safety of shellfish in the local waterways.

Latest laboratory results from the analysis of cockles and mussels for environmental contaminants, including oil, indicate levels continue to be well within regulatory limits. Many trees were burnt or destroyed on the land adjacent to the railway. The Coal Authority, the legacy owner of the former mining land, has put plans in place with consultants Adler and Allan to replant trees on the land, to restore the expanse of forest that was lost. The Rail Accident Investigation Branch, the independent watchdog, continues to investigate the accident. Finding new ways to monitor the railway and help avoid accidents like Llangennech will be part of RailTech Europe Live 30 March – 1 April.