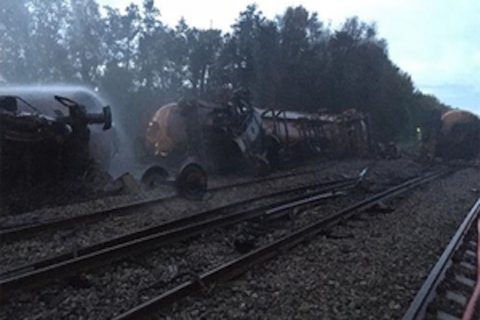 Wales update: weekend after the derailment

An oil tanker train derailed in South Wales, late on Wednesday night last week, and caught fire. Dramatic scenes were captured of flames leaping into the night sky, and the train burned for more than a day. Mercifully there were no casualties. Now that the investigators are on scene, the question is what happens now.

Just before midnight, on Wednesday 26 August, the alarm was raised. 6A11 was off the rails and on fire. 6A11 is 2,539 tonnes and three-hundred metres of heavy tankers, heading from Milford Haven Oil Terminal to Theale near Reading, the smallest of Puma Energy’s four UK facilities. The cargo consisted of around 2000 tonnes of motor diesel and gas oil.

Dispatch of 6A11 went as smoothly as usual on Wednesday evening, around 2200. Two hours later, the overnight journey to Berkshire was cut short. Residents in Llangennech, a community of 5000 people on the eastern edge of Llanelli, were awoken by the cacophonous sounds of eleven of 25 tankers crashing off the rails as the train rumbled over a tributary of the River Loughor. Moments later, a thunderous explosion lit up the sky as the load burst into flames. From then on, the night was a scene of chaos and confusion, as the sleepy suburb became the focus of a full-scale emergency response, and the eyes of the entire nation were trained on the Carmarthenshire location.

Fears that the entire train may burn, led to the evacuation of several hundred of the nearest residents. Fire and rescue workers breathed a sigh of relief that the incident was in relatively open ground. A matter of minutes earlier and the train was in the centre of Llanelli, and a short journey away from Swansea city centre.

However, despite the chaotic zig-zag of the tankers across the tracks and countryside, the fire was confined to only a few of the 100-tonne tankers, and the danger of a full train fire receded. Even so, the huge plume of smoke, toxic enough to keep those residents away all night and most of the next day, could be seen from much of South Wales during Thursday.

It was not until Friday afternoon that Mid and West Wales Fire and Rescue Service responders were able to hand back the site to be secured by British Transport Police, the infrastructure agency Network Rail, and the officers of the Rail Accident Investigations Branch, the independent inspectors of any incident on the British railway network. 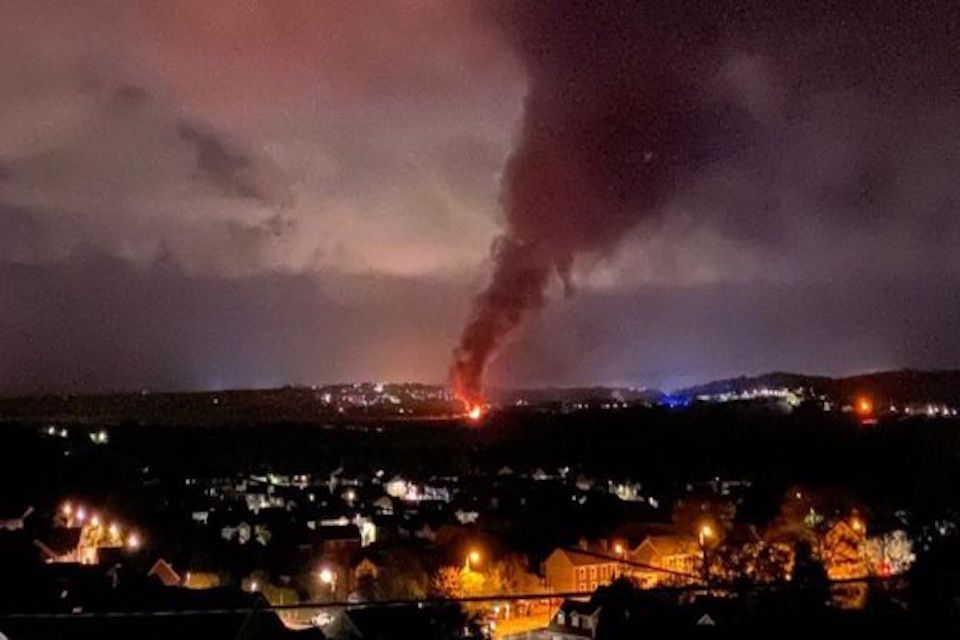 With much relief, representatives on the scene were able to report that the driver and engineer were uninjured and, being supported by DB Cargo UK after their ordeal. As is normal procedure in such circumstances, the driver and engineer submitted to a procedural interview with British Transport Police officers. Their company say they will continue to cooperate fully with all the various agencies involved in investigating the incident.

RIAB, the independent inspectors, are on site, and have issues a short statement of facts. It differs from the DB Cargo Uk account in only one respect, stating one less tanker had derailed. “At about 23:15 hrs on 26 August 2020, train 6A11, the 21:52 hrs freight service from Robeston to Theale, conveying 25 tank wagons, each containing up to 75.5 tonnes of diesel or gas oil, derailed on the ‘Up District’ line near Llangennech, in Carmarthenshire. The derailment and the subsequent damage to the wagons resulted in a significant spillage of fuel and a major fire. The driver, who was unhurt, reported the accident to the signaller. Subsequent examination of the site revealed that a total of 10 wagons (positioned 3rd to 12th in the train) had derailed.

“The fire was tackled by the fire service, who ordered the evacuation of local residents due to concerns for their safety. Local people have reported seeing a plume of flames and smoke, and the strong smell of fuel. Our investigation will seek to identify the causes of the derailment, and how these led to the fire. It will also consider any underlying management factors.”

While the threat to life has been alleviated, the derailment has left a significant headache, both for operations and environment. The tankers represent a significant challenge to remove from the site, and the derailed train is blocking both the coastal mainline west from Swansea, and eastbound access to the Mid-Wales line. With the Welsh rail system significantly curtailed over the years, no alternative exists for access to the oil storage facilities at Milford Haven. The Mid Wales line had already been closed by landslides triggered by stormy weather in the previous two weeks.

However, as dawn broke on the morning after the derailment, it was clear that the damage was not confined to the rails. While the accident happened out of any built up area, the tankers had come to grief, right in the middle of the environmentally sensitive Loughor Estuary … and they were leaking.

Environmental agency, Natural Resources Wales (NRW), moved in to investigate as soon as it was safe on Friday morning, only to confirm their fears. Early reports claim that some 750 tonnes of refined diesel oil has spilled into the estuary, which is home to wildfowl and wading birds, and a fragile wetland habitat.

It is not just the birds that find the area attractive. The population of molluscs – mainly indigenous cockles – attracts harvesters, and their livelihoods depend upon the health of the estuary. There is concern that the spillage may have lasting effects. Netwrok Rail route director Bill Kelly issued a statement via social media over the weekend.

Working with many agencies to maximise clean up and minimise environmental impact pic.twitter.com/eSlib8EDsf

Recovery is underway. While there can never be a good time for a serious derailment, Network Rail may be considering this as the worst possible time. The agency already had almost 1000 infrastructure operations planned for this UK public holiday weekend. Recovering a dangerous cargo from a derailed train in a designated area of environmental significance, while attempting to repair damaged permanent way was probably not what they bargained for. Of course, it being a public holiday in August, the weather could be relied upon. The forecast was for rain. Main image: Network Rail / RAIB.