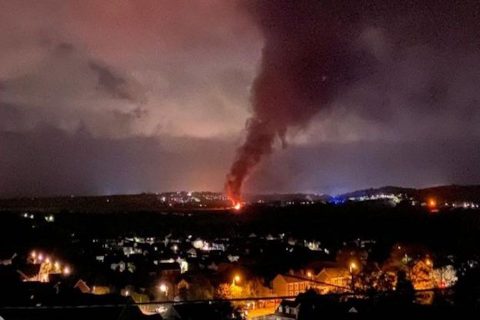 A freight train derailed and caught fire in South Wales, UK, late on Wednesday night. The accident forced the evacuation of homes in the village of Liangennech, nearby Llanelli in Carmarthenshire. There are no fatalities and residents have been allowed to return. There are conflicting reports of two injuries, but some media refute this. The Mid-Wales line, a lifeline for scores of communities in the remote interior of Wales, have lost their connection with the south. (Main image shared on social media from BBC and Adam Tilt)

Media in the UK has dramatic pictures of flames erupting into the night sky, lighting up the countryside. Local police immediately declared a ‘major incident’, which gives emergency services special powers to compel evacuation for the sake of life and limb.

Local videographer Archie Brown has posted drone footage of the burning train here. Tanks can be clearly seen snaked across the tracks and still burning more than twelve hours after the incident.

“This is a significant incident”, said Sean O’Callaghan British Transport Police assistant chief constable, in an interview reported by The Independent national newspaper. “Resources from across BTP, South Wales Fire and Rescue Service and Dyfed-Powys Police have been deployed to the scene to mitigate damage to the surrounding area and ensure the safety of all those living nearby. The fire continues and there is still a substantial risk within its immediate vicinity, so our advice remains for people to avoid the area.”

The train appears to be a fully laden tanker flow, from the nearby Milford Haven Oil Terminal, a major distribution point for the whole UK. Details of the working have not been confirmed.

The derailment appears to have blocked the Mid-Wales Line, a rural thread that connects many small communities in the hinterland of Wales. The usefulness for freight traffic was one reason the line was saved from a programme of closures in the 1960s.

Officials from the Rail Accident Investigation Branch (RAIB) are on the scene. No cause has yet been determined.

The incident comes on the same day as Network Rail responded to the tragic fatalities in Scotland with the launch of a wide-ranging review of its massive portfolio of cuttings and embankments, in the light of the landslip which resulted in the Stonehaven accident. Network Rail was also criticised by the RAIB for its maintenance regime in another report issued this week, referring to a freight derailment in London in May 2019.