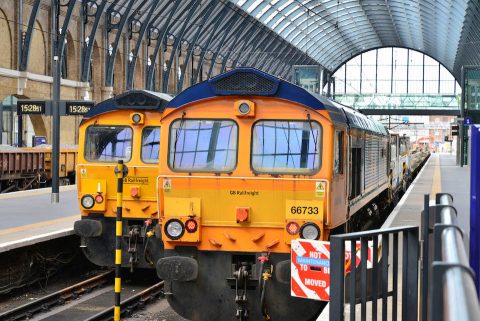 Delivering more than light logistics and parcels to the platforms at King’s Cross, GB Railfreight provided some weekend specials at the historic London terminal. The workings are all part of the huge enhancement project at the station, and all the way up the East Coast Main Line, which King’s Cross serves. The renewals and improvements, which are part of Network Rail’s biggest ongoing project, will deliver a rationalised track layout at the station, increase the number of approach tracks, and enhance capacity on the main line, providing more paths for semi-fast regional passenger trains and crucially free up paths for freight.

GB Railfreight (GBRf), one of the major rail freight operators in the UK, has been working on the project to renew the signalling system and overhead line equipment in the King’s Cross area, followed by major work to install a new simplified track design at London King’s Cross. The station, generally regarded by the public as a terminus, actually has through platforms in a tunnel, shared with the adjacent St Pancras International, as part of the London Thameslink service. Diverting more services on to the through platforms has allowed a terminal platform to be removed, which ironically, will significantly increase long-distance capacity on the remaining lines.

This work is part of Network Rail’s East Coast Main Line Upgrade programme, an investment project worth 1.2 billion pounds (1.4 billion euros). The main beneficiaries of the project will be long-distance passenger services and long-haul freight. There is also demand for capacity from light-logistics operators, seeking to use the ECML for electrically-hauled services, connecting London and the North East and Scotland. According to stakeholders, the project, when complete, will bring significant improvements to the East Coast Main Line, which will transform journeys between London, Cambridgeshire, the North of England and Scotland.

There is however, plenty of work to be completed before then. Between February and May 2021, GBRf plan to run over 100 trains from their facilities at Doncaster on the ECML, and Whitemoor Logistics Distribution Centre in March, in the East of England. The Whitemoor workings will traverse the lines via Ely, which is, itself, the hub for another major upgrade. That project will primarily enhance capacity to serve Felixstowe, which was recently awarded freeport status by the UK government, and is already taking enquiries from enterprises eager to locate operations there.

Operationally, GBRf say this is the largest engineering possession site with which they have been involved at any one time. At the peak of operations, up to 25 GBRf locos have been on site. The operator said the ability for quick turnaround demonstrates GBRf’s overall resilience at a time of economic and business uncertainty. Work began on 26 February, with several very intense weeks for GBRf’s engineering trains, followed by extended support that will be delivered by the company until the end of May 2021.

“This is another example of GBRf stepping up to support a huge bespoke project”, said John Smith, the company’s managing director. “It required a tailored solution, which we will be able to deliver thanks to the effective collaboration that is consistently shown across our team. We are proud to have demonstrated to Network Rail, and the wider rail industry, that GBRf can rise to a challenge and deliver a solution to support major infrastructure projects. This puts us in a strong position to accept similar campaigns in the future.”

Just the beginning of reconstruction

With the attitude to major rail projects becoming ever more welcoming, the prospects for rail freight support in infrastructure development seem to be improving by the day. The recently announced Okehampton project in the south west of England, and the forthcoming Ashington line project, just north of Newcastle, could be just the beginning of a reconstruction phase on the UK network.

The UK government has made much of its ‘Reversing Beeching’ initiative, which will see several modest projects undertaken. Meanwhile, campaigners and lobby groups must see more optimism for projects coming to fruition, such as the Peaks and Dales Line, championed by the Manchester and East Midlands Rail Action Partnership as a freight relief and passenger line, and the ambitious Campaign for Borders Rail, which seeks support from the Uk and Scottish governments to build a 66-mile (105 km) mixed-traffic mainline connecting north west England and south east Scotland.

Network Rail already has an extensive programme of enhancements and renewals in hand. King’s Cross and the East Coast Main Line represents a very high profile part of that programme, and an example of the implementation of their Project SPEED, designed to make such wide-ranging projects as affordable and deliverable as possible.

“We’re extremely grateful to all of our contractors, who are together making the King’s Cross improvements possible”, said Ed Akers, principal programme sponsor for Network Rail. “GBRf are playing a key role this work which, when complete in June, will see a new simplified track layout, two additional new tracks and the replacement of overhead line equipment and new signalling. For the next few months we will be fully focused on the successful delivery of the work and bring improved reliability and punctuality while also ensuring we have the capacity in the future.”