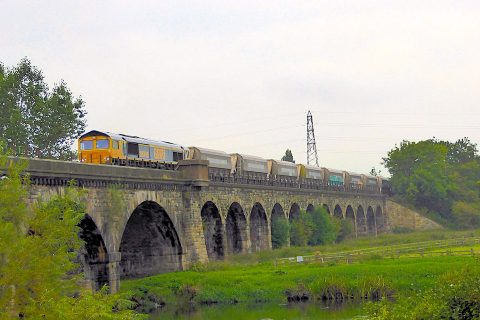 A line saved from closure, because it served freight traffic, has won a significant victory. It is part of a UK government scheme to restore passenger services to parts of the network closed in a rationalisation of the 1960s. The popularly known Ivanhoe Line, through a heavily populated part of the East Midlands, is a step closer to returning to mixed traffic. That may also have positive implications for existing and future rail freight.

The line between Burton-on-Trent and the city of Leicester, which connects two north-south main lines, and historically served several communities and industrial locations, has won funding in the UK government’s ‘Restoring Your Railway’ initiative. Although the line lost its passenger services over fifty years ago, bulk freight saved it from complete closure. With that traffic also now significantly reduced, campaigners have taken the opportunity to lobby for a restoration of passenger services.

Despite the decline in traditional traffic, freight for modern needs may yet have a positive role to play. There have been several previous attempts to get the line reopened to passengers, but a forecast subsidy requirement and difficulties in coordinating the agendas of several local authorities, stalled the plans. Today, with a renewed focus on the environment, there is renewed hope for success. The area is also at the heart of the fast-growing ‘logistics golden triangle’, with growing pressure for rail-served distribution terminals.

Brownfield land released by the closure of the local coal mining industry is being considered by developers as ideal for intermodal operations. There is the potential to avoid confrontation over further industrial development on green field sites nearby, such as the proposed Hinckley National Rail Freight Interchange (HNRFI), which faces strong local opposition despite being afforded the government’s Nationally Significant Infrastructure Project (NSIP) status.

Although generally understood to represent the direct line between Burton-on-Trent and Leicester, the Ivanhoe Line also supported a connecting network, which criss-crossed the area, serving coal mines and communities. A service running north from Leicester, to the university town of Loughborough, also carries Ivanhoe Line branding. The line takes its name from a popular novel romanticising medieval England. ‘Ivanhoe’ by Sir Walter Scott, is generally set in the region through which the line passes, known today as the National Forest, a designated national park.

The passenger service lobby revolves around several towns on the proposed route, and on the tourism potential of the National Forest area. According to the Campaign to Reopen the Ivanhoe Line (CRIL), economic development is being stifled in the region due to under funded rail infrastructure and chronic road congestion. Despite significant highways expenditure, they say Leicester-Burton road journeys take longer than they did 40 years ago, making business development and inward investment unattractive. Better all-round rail provision would, in their argument, go a long way to changing that for the better.

The prospect of added rail freight traffic, particularly fast intermodal services, would require significant upgrading of the neglected line. Speed restrictions, manual signalling and single track sections would all require modernisation say campaigners at CRIL. They point to the success of the Borders Railway in Scotland, and its possible extension as a mixed use route between Edinburgh and Carlisle, as proof of concept for the upgrading of the 30-mile (48 km) Ivanhoe Line route.

Having closed to passenger traffic in 1964, the line has since carried freight only. Following the closure of the coalfields it has been left carrying just aggregates, with around two trains per day. An infrastructure reinstatement is proposed for passenger services into Leicester. The so-called Knighton Curve would need to be rebuilt, but local planning authorities have allowed subsequent industrial development on the alignment. However, the scheme does in part feature in the recently published “Leicester Area Strategic Advice” document.

Campaigners at CRIL are proud that of the ten projects taken forward by the Restoring Your Railway initiative, their’s is the only one not initially promoted by a local authority. It’s not the only existing freight line proposed for reinstated passenger services however. As reported at the time, the Fawley Branch from Southampton is a similar case.

For the Ivanhoe Line, researchers at Derby University have been commissioned to write an environmental benefits study, for both diesel and electrically powered rail solutions. Fast freight alongside a modern passenger service may not be a novel idea, but for the Ivanhoe Line it is anything but a mere romantic notion.

Travelling, why not! But distance has matter to us because time is vary with it. So, are you still tensioning with it, Get rid off with logistics business in india, One of the leading logistics company. So, just grab it.