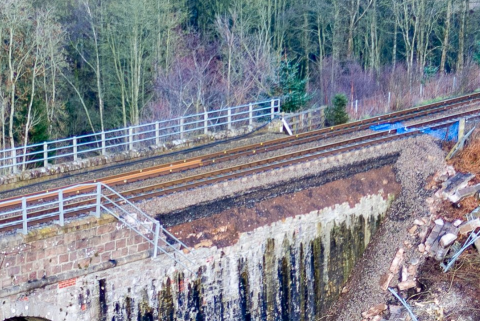 A bridge at Stonehaven, nearby the site of last year’s fatal derailment in Scotland, partially collapsed last week. Network Rail, the infrastructure manager for the UK, says the line it carries, between Aberdeen and Dundee, will not reopen until the second week in February. Passenger services are replaced by buses, and any freight faces cancellation or the same lengthy detour that was required in August.

The Carron Water bridge, which featured in the news coverage of the fatal derailment last August, suffered a partial collapse on Friday 15 January, forcing the line to close again. A retaining parapet gave way and fell into the river below. According to local media, the bridge was inspected only a matter of months ago, after restoration works had been undertaken on the line.

The last detailed inspection of the bridge took place in 2018, according to sources accredited to Network Rail. The same sources say that works were also carried out last year to protect the foundations of the bridge from potential flood damage. “None of this work took place at track level”, said a statement given to the Scotsman newspaper. “Structural assessments will continue over the coming days as the team on site makes plans for the bridge’s repair. It is too early to confirm exactly what work will take place, or timescales for its completion.”

Severe weather has been hampering operations in the past week, and extreme cold has made conditions difficult. However, Network Rail have admitted further bridge inspections have taken place at other locations with similar circumstances and design. In a report from the Press and Journal, the daily newspaper most popular in the north east of Scotland, it is claimed five more bridges in the region have been inspected – all of them similar to the Carron Water bridge.

The line runs due south from Aberdeen, often known as the oil capital of Europe, because of the concentration of North Sea operations in the city. Freight services are however modest in number from Aberdeen, but the terminal at Waterloo, in the city’s docks has been growing busier lately. Any services leaving Aberdeen during the closure will be required to make a several-hundred kilometre detour via Inverness. Alternative rail routes are not viable for passenger services, which are all replaced by buses.

“So far, we’ve completed extensive surveys and site inspections, including removing the southbound track and its supporting stone”, says a widely reported Network Rail statement. “We’re carrying out extensive checks on the northbound side too. “This will help us confirm the full extent of the repairs needed and set timescales for reopening the bridge for customers. We’re working closely with our passenger and freight operators and have confirmed with them that the line will remain closed until at least February 7”, they said.

Trades union, the RMT, issued a statement after last week’s storms and the bridge incident. Their general secretary, Mick Cash, called it shocking. “Even after the Stonehaven tragedy Network Rail have not been able to identify with us what areas of the railway are at risk from adverse weather conditions and what steps are being taken to reduce that risk”, he said.