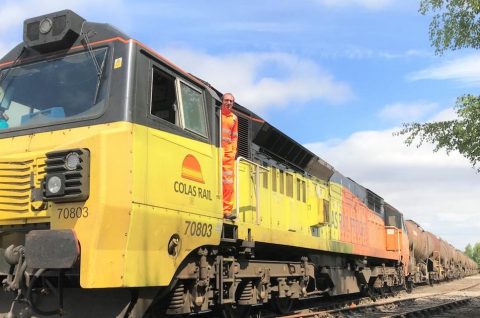 A successful trial of a significant new long-distance operation is underway, but a UK freight operator is keeping plans for shipping raw materials for glossy magazine production under wraps.

Aberdeen’s Waterloo freight terminal is a long way from the heart of the action. Unless you happen to be in the heart of Stavanger. Scotland’s famously northern city is closer to its Norwegian neighbours than it is to London, and to many of those Londoners who make the trip to the Granite City, think the locals sound more akin to their Norwegians cousins too.

Maybe that diverse dialect is to do with the trading links the busy port has historically fostered with Scandinavian partners. Those links are very much alive and well today, and thriving too. Aberdeen harbour is one of the busiest ports in Britain, with the obvious business generated by oil and fish related traffic.

However, it is another commodity It is not necessarily so readily identified, that keeps Waterloo working hard. The unlikely source of workings on the branch is more often associated with bulk supplies for the paper and publishing industry.

Calcium carbonate slurry, a versatile limestone derivative is shipped from Norway to Aberdeen, and piped to waiting trains for onward shipment. Most days will find a line or two of tankers awaiting filling and departure. A quick glance at satellite images will show a bulk carrier weaving among the oil rig supply vessels, ready to tie up and discharging to the holding facility.

This rather longer flow – fully five hundred miles (800km) – is operated by Colas Rail on behalf of chemicals giant OMYA, according to the local newspaper in Spalding. The final destination of the cargo is the Palm Paper Ltd plant in King’s Lynn, about 25 miles from Spalding (40km). The last leg is completed by road hauliers Coopers Transport Services. The tanker train makes use of the modest remaining facilities in Spalding, which was once an extensive railway junction.

Despite both Colas and Network Rail briefly heralding the trial, and the local Lincolnshire media reporting the flow, there has been a coy silence since then. Despite that, social media sources have been excited by the prospect of an unusual working, and new business for the UK rail freight industry.

Although Colas concentrates on other aspects of its rail business in the UK, the company does have a successful haulage operation, with a reputation for efficient tanked commodities distribution. Other flows support the construction industry, such as their existing contract with Tarmac to operate cement trains from Oxwellmains, near Dunbar in East Lothian, Scotland.

Workings are handled by the distinctive Class 70, which, apart from styling that wold be more at home in North America than in the north of Scotland, represents one of the most environmentally efficient diesel power plants in the world. It is also unusual for the class to visit Waterloo, which has latterly been the reserve of the ubiquitous Class 66.

Aberdeen Waterloo is possibly the oldest surviving former passenger station site to be in freight use in the UK. The last passengers alighted at the now demolished station in 1867. The modern freight terminal is on the site of an original goods yard, and historically extended via a long erased tramway to a terminus, subsumed by the the city’s existing main line station.

The track formation faces northwards, meaning most workings require a runaround to rejoin the East Coast Main Line. That said, the recently upgraded Aberdeen – Inverness line, to which the Waterloo branch connects, has paths available for freight traffic.