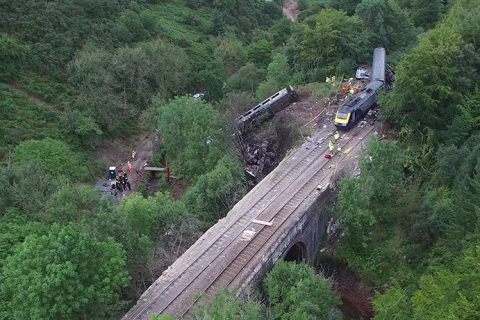 The UK rail infrastructure management agency Network Rail has proposed wide-ranging changes to the way it monitors and maintains the earthworks around its tracks. This comes in the light of the fatal accident at Stonehaven in Scotland, when a passenger train struck a landslip, killing three people on board. There has been a rising tide of other non-fatal incidents of landslip and derailments, and Network Rail has acted swiftly to address public concerns after the 12 August crash.

Things rarely go wrong on the railways but when they do, they can go wrong in a big way. Tragically, that has been the case in the past month, with the fatal accident at Stonehaven in the North East of Scotland claiming three lives, and the freight derailment in South West Wales causing a huge fire, ecological devastation, a potentially wiping out services on a rural lifeline for months to come.

Rail Accident Investigation Branch, the independent body that scrutinises any incident on the UK railway network, is of course on site at Stonehaven in Scotland and Llangennech in Wales, but both incidents are of prime importance to Network Rail too, the management agency for the infrastructure throughout Great Britain. Serious concerns have been raised about the nature of the accident in Scotland, which resulted in the first passenger fatality in over a decade.

The UK government’s Department for Transport, led by Transport Minister Grant Shapps, ordered a report, which has been carried out by Network Rail. This morning Network Rail has published that report, highlighting the measures it intends to take, with immediate effect, to mitigate the circumstances which befell the ScotRail passenger train just south of Aberdeen, and may well have implications applicable to the fuel oil train freight derailment in Carmarthenshire, South Wales.

As rail professionals often point out, dealing with landslips is a part of everyday maintenance of the railway network. The UK however seems more prone to such disruption because of the nature of the system – which is the oldest in the world. Tracks often rely on earthworks build in the nineteenth century, and the increasing incidence of severe weather – both dry and wet – is causing long term damage to embankments and cuttings. Network Rail has been the target of sustained anecdotal complaint for both not maintaining earthworks and trackside vegetation, but also for disrupting services to carry out the very same essential maintenance.

However, the Stonehaven derailment has forced their hand, and Network Rail has moved firmly in the direction of renewed efforts to tackle the problems. While not saying they can eliminate the issue of earthworks movement, without wholesale rebuilding of the infrastructure with modern materials and techniques, Network Rail has today committed to a regime of much closer monitoring and preventative measures. They aim to better avoid issues before they become failures, and hopefully mitigate disruption as much as possible. They also say they will put in place better monitoring of conditions, and a regime of avoiding movement when wether conditions become a risk factor.

Measures to be taken

The report, published this morning, makes two headline commitments. In the first instance, Network Rail say they will find better ways to monitor weather conditions locally, and put in place caution or stop orders where there is an identified risk to traffic. How they might achieve this is open to speculation, but the likelihood would involve working closely with the existing UK weather services, such as the Meteorological Office (the Met Office), to predict when and where severe weather systems might hit. Network Rail already monitors air temperature readings, so that temporary speed restrictions can be implemented during hot weather, which can adversely affect continuously welded rails. They also carry out an annual programme of leaf management in the autumn, among many other climate related tasks.

The second measure is more long term, and could be potentially much more expensive and challenging to implement. This will require Network Rail to improve its overall management of earthworks in general, and monitor the entire network for signs of deterioration. While this is already carried out – but such sophisticated means as the famous yellow-liveried measurement train – it suggest a much more intense regime of monitoring. This may mean permanent sensors installed across the network, or a much more frequent programme of visual inspection. While modern construction standards call for resilient methods to be used – either impermeable facings or caged rock based modular construction, traditional cuttings and embankments are often earthworks which remain moveable in changing climatic conditions.

The Rail Accident Investigation Branch has yet to publish a definitive statement on either the Stonehaven crash of 12 August, or the Llangennech derailment on 26 August. However, in pictures released and in interim comment, the evidence at Stonehaven points towards landslip as the primary cause.

While accidents have become less and less frequent on Britain’s railways, they do still occur. The advantages of the rigorous systems of investigation and recommendation have invariably led to continual improvements, some of which have come at huge expense, but ultimately saved lives and made the system safer and more commercially viable. If any good is to come from these two incidents, it may be that the railway is a more stable environment in the future, no matter what the cost may be.