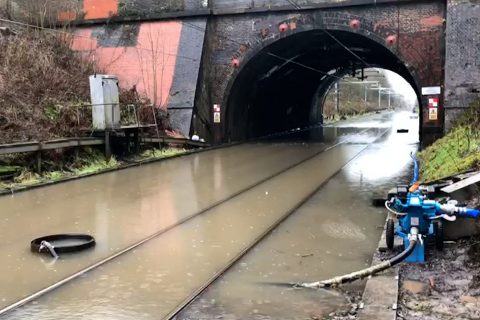 Floods in the south, blizzards in the north. Storm Christoph delivers a weather shock to the UK, and rail services are affected in several areas. Vast quantities of rain caused multiple flood incidents, disrupting rail and other services over a wide area this Wednesday and Thursday. Further north, in the higher latitudes of England and Scotland, heavy snowfall caused similar problems.

The first big winter storm of 2021, designated Christoph, has hit Britain hard. It has caused disruption to logistics over a wide area, particularly in the northern cities, including Liverpool, Manchester, Leeds and Sheffield. Further south, low-lying and flood-prone areas have been on maximum alert, with memories still fresh of the disruption caused this time last year to the vast Drax Power Station complex, which depends on rail-delivered biomass to generate electricity for the national grid.

Man the pumps as rain floods in

Flooding is affecting several rail routes, mainly in the north of England, but with concerns for low-lying areas further south and in Wales. In Scotland, significant snowfall is disrupting transport and other logistics. Network Rail say they are using high volume pumps to clear floodwater so its teams can carry out safety inspections. Safety speed restrictions remain in place on the West Coast Main Line, the busiest mixed use route in Europe, and on lines around Greater Manchester, Merseyside, Cheshire, Lancashire and Cumbria. Manchester has been a surprise casualty, with lines in the south of the city, including the Metrolink tram network under threat. Freight planners are concerned, particularly with the lack of alternatives and the notorious congestion pinch-point at the Castlefield Corridor difficult to access at short notice.

The first big weather event of 2021 is being put down to Storm Christoph – a slow moving ‘deep depression’ -bringing a band of very heavy rain and snow to a wide area of the UK. What has made this event so disruptive is the slow movement, meaning lots of rain and snow over a prolonged period. Phil James, managing director for Network Rail’s North West route, said the storm was behaving as anticipated. “As expected we’re now seeing the full force of Storm Christoph and our extreme weather action teams are working flat out to keep trains moving.”

Snow service intermodals get through

Ground in the North of England is very wet from sustained heavy rain and with more on the way there is an increased risk of landslips and flooding. Further north, there was a disturbing incident near Stonehaven – which was the scene of last year’s tragic derailment, caused by multiple landslips. The line was again blocked last week due to a partial collapse of a bridge retaining wall, which is being investigated and repaired. Weather erosion has not been ruled out.

Network Rail, the UK infrastructure manager had been preparing for severe weather. A squadron of specialist equipment is on standby each winter, and has been deployed around the network.

The storm is not connected to the recent unexpected weather event in Spain, which disrupted much of the country, but The Met Office, the UK weather service, predicts that Storm Christoph will be followed by a cold spell, with sustained sub-zero temperatures. Parts of Britain that rely heavily on rail-delivered essential supplies are gearing up to welcome the sight of an intermodal in the snow.