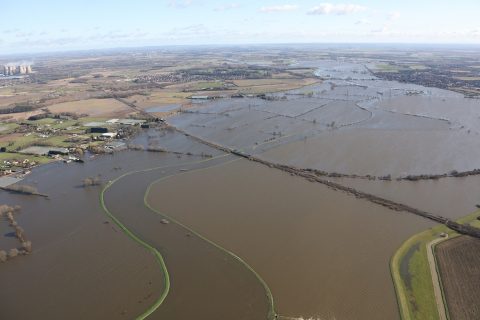 Vital to keeping the lights on, Network Rail has fully reopened what they call one of most important freight lines in Britain after an unprecedented repair operation. The line safeguards supplies to Drax Power Station, Britain’s most significant conventional generating station. Not to mention releasing dramatic pictures of the huge extent of flooding that crippled the route.

Divers, drones, helicopters and Koi Carp. It has been one of the most complicated repair projects, carried out under the most trying of conditions; and underwater as well.

The devastating floods that hit Britain in January and February left the Yorkshire countryside around the River Aire under billions of gallons of flood water. The pictures released today by Network Rail, the UK infrastructure agency, dramatically illustrate the extent of the damage. It takes a close look at our featured image to spot the Drax Power Station complex, dwarfed and marooned in the flood waters.

Remarkably, over 90 trains per week were still able to use route whilst repairs were carried out. Most of those carried supplies of biomass pellets to the power station complex, which has been progressively converted from coal fired. The line into Drax Power Station, near the former mining community of Selby, was inundated with flood water in February when the nearby River Aire burst its banks. Since then, engineers have been deployed round the clock to maintain the constant safety reassurance required to keep freight trains running.

Chris Gee, head of operations for Network Rail North and East Route, said this was an unprecedented operation to deal with an unprecedented situation. “It’s never been more important for us to keep freight services running”, he said. “We pulled out all the stops to maintain this vital link while we conducted repair work at the same time. This has been a real team effort and shows the dedication of the rail industry to vital services moving during this national crisis”.

Divers were deployed to inspect structures which were underwater to check for damage. Among the fishiest challenges was rehoming several Koi Carp, who had strayed from an inundated private residence.

Long term, Network Rail is working on ways to improve resilience on the line. Commenting on the project, rail minister Chris Heaton-Harris emphasised the importance of the industry overall.“Freight plays a vital role in ensuring critical food and supplies can continue moving smoothly at this challenging time”, he said. “It is fantastic news that this important line has reopened, and once again I want to thank frontline staff for their efforts”.

Parliamentary colleague and local MP Nigel Adams said the flooding in February showed how important it is to respond immediately to flooding events. “Fortunately, Drax Power Station was able to continue to generate electricity because Network Rail responded immediately by introducing emergency operational procedures. I am delighted that Network Rail have now completed the repair of the embankment and the line is back to two track working.”

However, on his constituency website, Adams is backing an investigation into the response to the emergency. “The flooding in February seriously affected an important railway line. We need to thoroughly understand the sequence of events and decide what needs to be done to ensure our defences are fit for purpose. I am very pleased that North Yorkshire County Council are leading what could be a complex investigation. They will have my full support”.

Meanwhile, Drax CEO Will Gardiner reiterated thanks to the engineering teams who had helped keep the power station supplied with fuel pellets.“The teams who worked tirelessly at Network Rail, on the UK rail freight system and at Drax to ensure deliveries of sustainable biomass were maintained throughout the repair work, so we can continue to generate the power the country needs during the Covid-19 crisis, have done a tremendous job”.

DB Cargo UK and GB Railfreight share the delivery duties to Drax. John Smith, GB Railfreight managing director said these operations supported the wider efforts of the sector. “GBRf is committed to continuing and re-doubling its efforts to ensure that freight continues to move around the country during these unprecedented times”. DB Cargo UK head of sales Roger Neary praised the teamwork. “The communication and collaboration by all parties has been brilliant; ensured a seamless supply of material to the power station. It’s great to be able to play a part in keeping the UK running during these difficult times”.

Network Rail and their contractor Construction Marine Limited will continue to monitor the line in the aftermath of the flood.