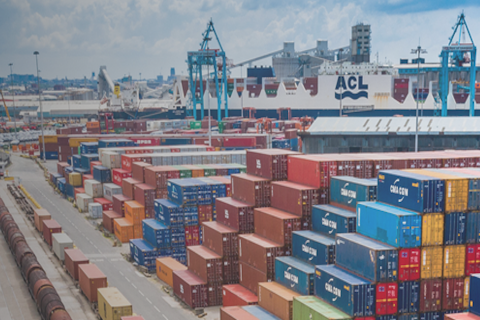 Rail freight stands to be a winner as the port of Liverpool secures more intermodal traffic. From this week, 2M Alliance – a vessel-sharing partnership between Maersk and MSC – is bringing a transatlantic loop service to Liverpool. The weekly landing has the capacity to deliver almost 6500 TEU (over 3000 full-length containers). Rail freight operators are already stepping up activity at the port.

Transatlantic sailings at Liverpool have increased, as west coast ports take some of the strain off hard-pressed Channel and southern destinations. Two major global shippers have collaborated to land a weekly service. Recent new rail connections between Liverpool and intermodal rail terminals at East Midlands and Mossend, have provided extra capacity to move containers from the quayside to distribution centres in England and Scotland.

Britain’s container ports have been experiencing growing congestion, particularly south and east coast locations, where fears over impending Brexit-related disruption have encouraged extra shipping movements ahead of this week’s 31 December transition date. Seasonal pressures too have been exacerbated by global supply chain problems caused by the Coronavirus pandemic.

Vast numbers of empty shipping containers are stacked up in European and North American ports, with Asian ports experiencing shortages. “The absolute largest problem in container shipping right now, is the dire shortage of empty containers in key locations, especially in Asia”, said Alan Murphy, the chief executive of maritime trade analysts Sea-Intelligence. “This is what is driving spot rate markets to historical highs, and it is what is causing significant grief to shippers looking to get their product moved in a timely fashion.”

Moving traffic away from Britain’s congested ports is proving a headache that rial freight is soothing. Even so, the prospect of moving upwards of 3000 extra containers arriving weekly at Liverpool will be a massive logistics exercise. Some unattributed reports say that shore handling is feeling the pressure at Liverpool already. The 2M Alliance sailing replaces a previous routing to Felixstowe, but the port claims to be well prepared. “We have been working closely with the 2M Alliance over the last few months to accommodate its TA2 transatlantic service and expand our transatlantic offering”, said David Huck, managing director for group ports at Peel Ports Group, the operators of Liverpool. “By choosing to re-route the service to Liverpool, the 2M alliance will be able to take advantage of our strategic location, hinterland connectivity and a closer proximity to UK import and export markets, reducing cost, carbon and congestion.”

Analysts are recommending a two-pronged approach to solving the supply chain problems as quickly as possible, although they still predict at least one more two-month shipping cycle of disruption. “The only scenario in which there is a prospect of resolving the problem in January is the one where carriers both procure new containers, as well as reposition aggressively”, notes Murphy of Sea-intelligence.

There is container manufacturing capability in Europe, although it’s likely that new-build will come from the factories in China – to relieve shortages there. For UK and European rail freight hauliers, that could leave an enormous over-supply of empty containers to move around. Getting containers back to Asia via the Silk Road is only a realistic option if they are laden. Empties, in the quantities required, may only be viable by ship. “This is exactly the strategy that carriers are currently pursuing”, says Murphy. “However, this strategy causes significant problems for back-haul shippers.”

With intermodal already the dominant load for modern rail freight, it’s likely that there will be demand for even more movements – in the first few months of the new year at least. They just might be rattling about empty for a month or two, and ports like Liverpool could benefit from that.