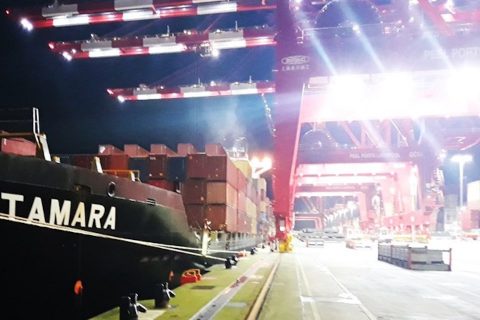 Partners in sea, ports and rail operations have launched a new service between Liverpool and Scotland, to help break Brexit congestion in the south of the UK. A collaboration between Peter D Stirling at the Mossend terminal near Glasgow, Peel Ports at Liverpool, and three maritime container operators, has put the new intermodal rail freight service on the tracks. The service will run up to four days a week between Central Scotland and the major port in the North West of England.

The new line will strengthen existing ties between the terminals. The combined operators say the flow will help avoid delays expected around the Brexit transition at the end of Decemeber, and help maintain deliveries during the peak Christmas period for manufacturers.

The intermodal service between Liverpool and Scotland has been significantly boosted by augmentation of the existing three-times-a-week departures. The service, which has been running for over two years, has been stepped-up to help deal with increased cargo flows into the port, and to help take traffic off the congested roads around the Liverpool docks. The new fast service is scheduled to make the end-to-end trip in under eight hours.

Delivery in time for the big day

Liverpool is proving increasingly popular with shippers, keen to avoid widely reported congestion and delay in the southern ports of the UK. “As the whole UK logistics sector is aware the UK ports sector is struggling to cope with the pre-Christmas rush of imported cargo”, says a statement from Peter D Stirling, the family-run operators of the Mossend rail freight terminal near Glasgow. “The major hub ports are heavily congested and this has spread to the container ports in Scotland as well. Peter D Stirling, working with Peel Ports in Liverpool and three very large European based container shipping lines have come to the rescue and are helping to get these much needed containers off Christmas related freight to Scotland in time for the big day.”

Intermodal traffic between Liverpool and Scotland is a well established flow. Rail freight operators DB Cargo UK have been hauling intermodal traffic between the two terminals since May 2018, when the initial three-times-weekly service was launched amid much fanfare, including the endorsement of the metropolitan mayor of Liverpool, who performed an official launch ceremony.

Shipping operators, including MSC, one of the partners in this expanded operation along with CMA CGM Group and Hapag-Lloyd, have been reported as diverting sailings from the South Coast port destinations to the Port of Liverpool. From there, increased high speed container train frequency and distribution has helped import and export traders maintain schedules. Less than two week’s ago, a new rail freight service began operating from Liverpool to East Midlands Gateway, and only today, the port announced record-breaking landings at its Liverpool2 terminal.

MSC’s container vessel Tamara docked with a cargo of 5,956 TEUs – exceeding the record for a single vessel at the port by almost 500 TEU. Clearly, rail freight capability has a part to play in making short work of such huge volumes. David Huck, the managing director of the Peel Ports Group, said the growth was breaking what he called the inefficient UK model of a dependency on south and south east ports. “Businesses need assurance during difficult times that their supply chains are able to cope with the increased demand. This demonstrates that the Port of Liverpool is ready to meet their requirements and play a vital part in the transformational change in UK logistics.”

With a journey time by rail from Liverpool to the Mossend Railhead of under eight hours, cargo is leaving Liverpool in the afternoon and being delivered in the Central Belt of Scotland the next morning, according to the Mossend operators. “No jams, no delays and, of course, logistics in a much more environmentally friendly way with 79 per cent less CO2 emissions than by truck”, they said.

Scottish exporters were early adopters of the southbound services, when the intermodal flow began in 2018. Walkers Shortbread, producers of a traditional sugar-laden baked biscuit, send some 700 containers annually to North America and have been using the service since day one. Potato products and whisky have also been regular consignments. Speaking at the time, Andrew Stokes of Walkers said the service offered a direct connection to a prime overseas market. “High value products can be safely and quickly loaded onto the ships and exported, with no delays and excellent security as the train from Mossend goes direct into the port in Liverpool.”

Expansion at both terminals

After decades of decline, Liverpool as a region is regaining momentum as a trading hub. The port is in the middle of a revival, and the operators are confident of future rail freight expansion, in line with their green policy.

Carbon reduction is already a reality at Mossend. Earlier this year, the Scottish government chose the rail freight terminal as the venue to launch its own green investment programme. Additional cross-border traffic has been welcomed too. “This initiative to help and support Scottish business through these difficult times in an obvious carbon reducing way has been applauded by all parts of the supply chain”, said the operators statement. “Mossend Railhead will be expanded into MIRP (Mossend International Railfreight Park) over the next year or two and these carbon free and innovative ideas for the whole Logistics sector will, can and should only grow as Scotland moves towards the Carbon Zero targets set by the Government.”