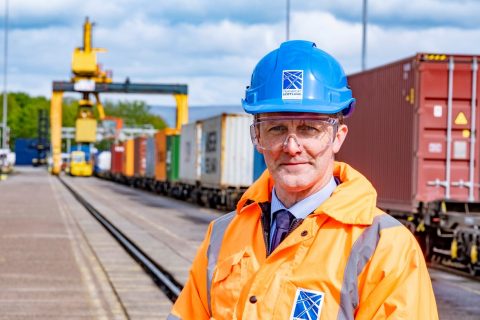 Cross-border connectivity, capacity, and light goods sent by rail were all subjects for debate with Michael Matheson, the transport secretary at the Scottish government. The politician with responsibility for rail management, infrastructure, and development was answering questions in a virtual break-out session organised in conjunction with the annual conference of the Scottish National Party.

Plans for freight provision were scrutinised in detail in an hour-long interview given by Michael Matheson, the transport secretary at the Scottish government in Edinburgh. He then took questions from an invited audience, including RailFraight.com. The event was hosted by Darren Caplan, the chief executive of the Railway Industry Association, the body that represents supply chain businesses in the UK. The minister was interviewed by the leading journalist, columnist and transport specialist at The Scotsman newspaper, Alastair Dalton.

Transport matters, including rail services and development, are the responsibility of the regional devolved governments in the UK. Central government in Westminster retains control for all transport matters in England, and has overall responsibility for the infrastructure agency, Network Rail. In Scotland, Matheson and his departmental agency, Transport Scotland, deal with issues within Scotland, and collaborates with Westminster on cross-border matters.

Although the minister briefed his audience extensively on passenger matters, freight provision was a recurring theme. Matheson pointed to recent examples of freight development in Scotland, including the return of timber traffic for the first time in over a decade. He also pointed to the sidings being built by Highland Spring, the mineral water company in the Perthshire village of Blackford, whom he expected to be dispatching trains capable of removing 75 heavy goods vehicles from the Scottish roads.

Electrification within Scotland and at key UK ports

The Scottish government has published a comprehensive programme of decarbonisation for Scotland’s railways. Some remote lines will be alternatively fuelled by battery or hydrogen fuel cell traction, while the bulk of the network will be electrified. Matheson said that electrification was valuable to the rail freight industry as it would make it much more competitive. “What is worth keeping in mind is that some of the goods that are moving in Scotland are moving south of the border”, he said.

Flows that cross the border with England have pros and cons for the minister. “A couple of the key ports to which we want to move goods are not electrified”, he said. “I have already highlighted to the UK government a number of areas where electrification in England would help to support us in getting more freight onto the rails, and I’m continuing to pursue that with them, because that would help to improve freight connectivity between Scotland and England. In my view electrification is one of the critical elements in getting more freight onto rail. It is an area in which we want to continue to expand and develop, and the investment we are putting in at Blackford is a very good example of our ambition to try and achieve that.”

However, it was an issue of failed cross-border co-operation that brought tension to the proceedings. Matheson accused the Westminster government of interference in the affairs of his government. The matter in question is the Union Connectivity Review, a public consultation which has opened for submissions from all around the UK. Matheson quite angrily chastised the UK government for unilaterally launching the consultation, which makes specific reference to connections between Scotland and Northern Ireland – both devolved nations within the UK, who have their own transport policies.

The review also cites cross-border connections between England and Scotland, and mentions the Borders Railway as a freight and passenger route option. Matheson was especially critical of the cross-border aspect, since extension of the Borders Railway is an active project within Scotland. In addition to serving new communities, reopening the line, which has also been recommended by the industry-representative High Speed Rail Group, would relieve pressure on the busy West Coast Main Line, and help extract capacity benefits from the HS2 project.

Recent new bulk flows from Aberdeen and growing intermodal traffic in Central Scotland are among the elements that have strengthened the case for greater investment in facilities in Scotland. However, the minister was called to account for priorities which still seem biased towards road infrastructure. He was pointedly reminded of the 200 km long parallel road and rail corridors which form the transport spine between Central Scotland and the Highlands. The Scottish government has been criticised for a stated commitment to upgrade the entire length of the road to dual-carriageway, while the railway remains largely single-track and restricted in capacity.

The minister refuted claims, and said rail investment was more long term. He pointed to investment in ports such as Grangemouth on the River Forth, and the possibility of developing a whole railway technology hub around the proposed Talgo rolling stock research and manufacturing plant on the site of a decommissioned power generating station at Longannet. There is the possibility of reopening the local line between Alloa and Fife if the Talgo factory at Longannet goes ahead, noted the minister. He said that would potentially the opportunity to look at other operations around that, including possibly resurrecting the European freight ferry service from Rosyth. “The challenge has always been that freight operators have always found the Rosyth ferry an uneconomical option”, he said.

Overall, in the UK industry, there is a debate for moving more light goods by rail, particularly in the light of post-pandemic passenger demand. With numbers depressed, and likely to be for some time – despite bullish predictions from organisations like the Railway Industry Association – there is likely to be capacity opportunities for innovative operators. The minister admitted that Scotland was yet to embrace the opportunity. “It’s not something we’re looking at right at the present moment, but it’s something which I am very open to. I am conscious that the profile of how our railways are used in the future will be different from where we were pre-pandemic.”

“There is no doubt in my mind that there will be changes in the way people make use of rail, which will result in us having to revisit some of the generally accepted ways in which we would go about planning and way we deliver rail services. So there will be changes. In my view, rail has got a very good future and quite an exciting future, but it will be different to the future we had pre-pandemic. The type of initiative you are highlighting, smaller scale freight opportunities, is something we can become very open to, and explore factoring that into our thinking going forward. I’m also conscious of the need to have as resilient a passenger service as possible, and there is always a challenge in trying to balance out the needs of the freight sector with that of the passenger service.”