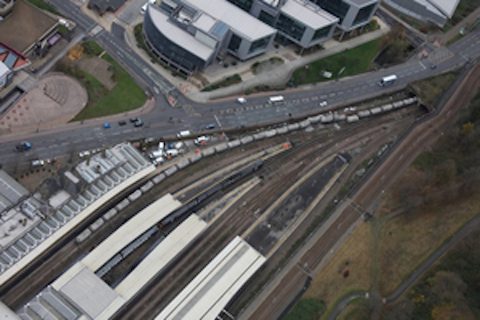 Track fastenings failure led to the Sheffield cement train derailment in November, says the independent watchdog in the UK, the Rail Accident Investigation Branch. The RAIB has determined that a track failure led to the calamitous derailment of a cement train in Sheffield station, which caused widespread disruption across the network. That is the headline from the preliminary report, just published, into the derailment on 11 November 2020. Initial examinations suggest the track was already broken prior to the accident.

Services through Sheffield Midland station, the main rail hub for the city, were halted after an accident left the north throat of the station blocked by a derailed cement train. No injuries were reported, but the disruption to freight and passenger services lasted aver a week, and repair work will take some time to complete. Now, the Rail Accident Investigation Branch, which has a duty to investigate all incidents on Britain’s railway network, says it has found evidence pointing to a prior failure of rail fastenings as the primary reason for the incident.

In a statement, issued on the evening of 30 November, the RAIB say their preliminary examination has found that a series of rail fastenings, intended to maintain the correct distance between the rails, had broken. “Initial evidence suggests that some of these were already broken before the derailment”, says the investigators’ statement. “Consequently, as the freight train passed, the rails moved apart and some of the wagons’ wheels dropped into the space between the rails.” 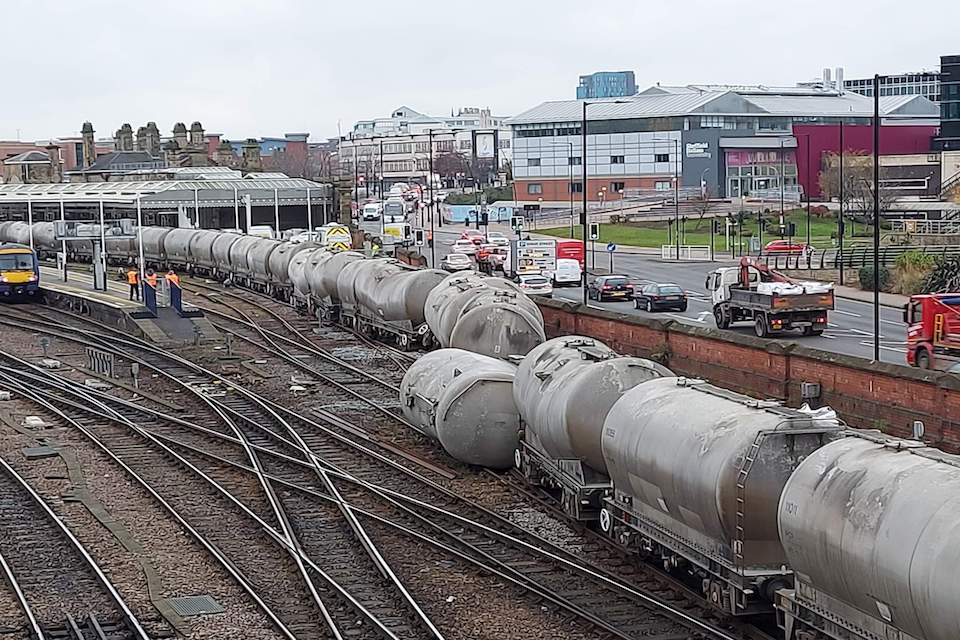 The initial findings suggest the freight operator was blameless in the incident. Train services were disrupted for several days while the wagons were recovered and the consequent track damage repaired. “Our investigation will seek to identify the sequence of events which led to the accident”, said a standard statement from RAIB. “It will also consider any factors relevant to the design and maintenance of both the track and the wagons involved, how the risk of derailment was controlled at this location and any relevant underlying factors.”

At about 02:45 hrs on 11 November 2020, the freight train, operated by Freightliner, conveying 34 wagons loaded with cement powder, derailed as it was passing through Sheffield station at around 12 miles per hour(19 km/h). The train was travelling from Hope cement works in Derbyshire to Dewsbury cement terminal in West Yorkshire – a relatively short journey of around 40 miles (64km). 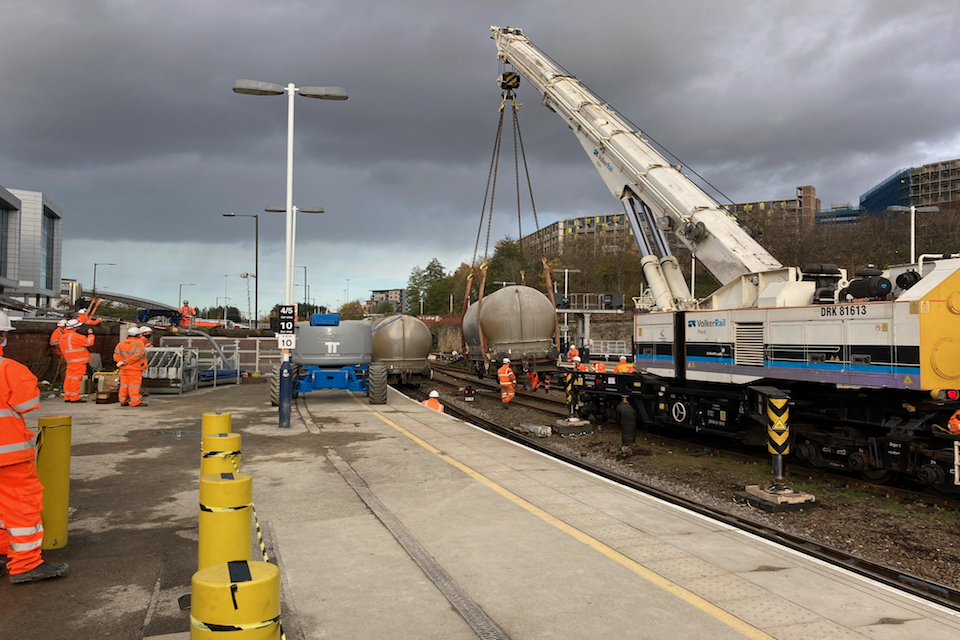 A total of 16 wagons derailed after passing the north end of Platform One. The leading ten wagons and the rear eight wagons remained on the track. One of the derailed wagons tipped onto its side and spilled some of its cargo onto the track. Recovery was compounded by the restricted nature of the site, and the need to position heavy lifting gear on an adjacent road, which required a city centre highway to be partially closed.

The train brake pipe started to leak as the wagons derailed, resulting in a gradual application of the brakes. The driver saw the brake pipe pressure gauge dropping and applied the train brake, thus stopping the train. This coincided with the signaller making an immediate ‘stop all trains’ emergency call to trains in the station area after becoming aware of multiple track and signalling failures.

Train services were disrupted for several days while the wagons were recovered and the consequent track damage repaired. RAIB say they will, as normal, report back to the industry’s regulator, the Office of Rail and Road, and publish their findings, including any recommendations to improve safety, at the conclusion of their work.