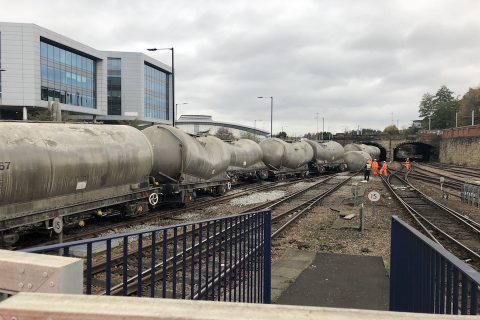 A major derailment occured in the English city of Sheffield. The accident happened within the main passenger station. Freight and passenger services are suspended or severely curtailed. Although highly disruptive, the low-speed incident has not resulted in any injuries.

A tanker train, conveying a consignment of cement, derailed at about 02:45 this morning, 11 November, while passing through platform one at Sheffield’s Midland Station, the city’s main travel hub. Network Rail, the infrastructure agency for the UK, say it was a slow speed derailment, but multiple wagons in the 34-car train have come off the tracks. As yet, there is no indication as to the cause of the incident.

There is major disruption across a large part of the UK network following a freight derailment in the heart of Sheffield’s historic Midland station. Passengers are facing major disruption for the rest of the day at least. A statement from Network Rail says there were no injuries, but the incident has led to significant damage to signalling and points equipment, which means five of the station’s eight platforms are closed.

Network Rail workers have been on site overnight and an emergency operations plan has been put in place, with three platforms made available to enable a very limited service to run. As is standard practice with any train derailment, says the agency, inspectors from the Rail Accident Investigation Bureau will have to examine the scene before the train can be removed.

The derailment, at the north end of the station, is compromising the single pair of tracks out of the city. British Transport Police said no one had been injured in the derailment. Although not confirmed by the company involved, the stricken working would appear to be a Breedon Group train, heading from the Hope Valley cement works, located to the west of Sheffield, in the Peak District. RailFreight.com sources say the working was from the Hope Valley Cement works to a depot in Dewsbury, a relatively short fifty-mile (80km) trip. The working is generally handled by Freightliner. A spokesperson said “we can confirm that a Freightliner service became derailed whilst passing through Sheffield Station on the morning of Wednesday 11 November 2020. We apologise for the disruption and inconvenience this incident has caused.  The safety of the public and our employees is our first priority and we are cooperating fully with Network Rail who are leading the investigation into the cause of the incident.”

This incident is affecting passenger operators CrossCountry, East Midlands Railway, Northern and TransPennine Express. Many of their services have been cancelled. Freight operators have limited options for diversion, as all lines in the area pass through the station.

Other incidents this year

Anyone planning on travelling on routes through Sheffield today is urged to check with their train operator before travelling, or direct with the passenger information agency National Rail Enquiries. Matt Rice, route director for Network Rail’s North and East Route, said: “We’re really sorry about the huge amount of disruption that will be caused today. Thankfully, train derailments are very rare, but when they do happen we have to act with utmost caution to protect the safety of everyone using the railway.”

Of course, while Rice is correct, and derailments are rare, they do make headlines. Earlier this year, the derailment of an oil tanker train in South Wales made national news headlines, and the damage done to infrastructure is not expected to be remedied until the new year. Earlier freight incidents this year caused disruption around Southampton, Scunthorpe, and in North London, where a derailed and dragged wagon wrecked several kilometres of commuter rail lines. Of course, the country has continued to pay respects to the three crew and passengers killed in a fatal passenger train derailment in late summer.

Rail Accident Investigation Branch personnel are on the scene, but the RAIB has yet to issue an official statement. Earlier, posted on social media and attributed to the Office or Rail and Road, a brief note said: “we are aware of an incident which took place this morning where a freight train derailed near Sheffield Station. Thankfully, there has been no loss of life or injury to staff or members of the public. Two ORR inspectors will attend site to investigate what happened.”

Given the acute visibility of the incident, it has already been headline news across the UK. Network Rail’s Rice says his colleagues have been attending too. “We will have our people working around the clock to get the station fully reopened as quickly as possible, but it’s going to be a complex problem that won’t be resolved immediately”, he said.

As to when lines may reopen, Rice could not give a concrete answer.

Glad everyone is ok, out of curiosity, I’m looking forward to learning the cause, On a lighter note, I couldn’t help a little smile, when I read at the end, it’s reported what the product the train is carrying and when the lines are to reopen, RICE couldn’t give a concrete answer!…