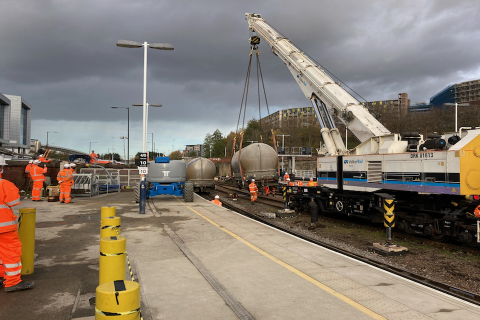 Sheffield recovering after derailment, still work to be done

Trains are running again through the partly damaged Sheffield Midland station northern England. Infrastructure repair works continued over the weekend so that services could partially resume on Monday. Last Wednesday, a slow-moving freight train conveying cement had derailed over the north end of the station. The derailment compromised the pair of tracks out of the station and disrupted all passenger and freight movements.

Although services are now running though the station, infrastructure agency Network Rail says there is still work to be done to permanently repair the full extent of the damage. Workers have been on site at the city’s main station since the early hours of 11 November, right after the train from Hope to Dewsbury derailed in the station. Train operators think it will be several days before full services resume.

Work is now underway to assess the full extent of the damage to railway equipment and work on a plan for repairs. Network Rail successfully removed all of the wagons which did not derail in the incident. The next steps included unloaded the derailed wagons, to enable them to be safely lifted and removed by a crane. The cement was removed by heavy-duty vacuums, positioned on an adjacent highway, which was partially closed for the operation.

Track repairs began on Saturday, with the intention of resuming services as early as possible on Monday afternoon. Some inter-urban passenger services were able to resume quite soon after the derailment, but local services and some long-distance trains were badly disrupted. National Rail Enquiries produced a long list of amendments and cancellations, and many passengers were advised not to travel at all. On Monday, there were still delays and cancellations.

Freight traffic in the area has significantly changed over recent decades. Much of the heavy industrial traffic has disappeared, as the industrial profile of Sheffield and the South Yorkshire region has moved away from smoke-stack industries, such as steel production, for which the city is historically famous.

The demise of wagon-load operations further reduced infrastructure demands, and avoiding lines have been abandoned, with a small number of freight movements routing through Sheffield Midland station, of which this working, between Hope to Dewsbury, would normally be an example. Midland station is itself the survivor of a rationalisation that saw closure of the historical rival station, Victoria.

Phil Mortimer of TruckTrain says that rationalisation perhaps has gone too far. Although the UK’s investigation body RAIB will take some time to determine the cause of Wednesday’s derailment, Mortimer says the acutely disruptive location was historically avoidable. “The point about rationalising freight avoiding lines is well made. Some of the crass decisions made in the past are coming back to haunt the sector. Short term accountancy ‘savings’ are biting hard”, he says.

Restricting capacity is now proving an issue across the entire network. For example, the abandonment of avoiding lines for freight at Carstairs, a junction in Scotland, is now impacting on West Coast Main Line capacity, just as the HS2 project is clamouring for more paths to be made available. “Most freight used to operate on the avoiding line between Chesterfield and Rotherham”, says Mortimer. “Freight through the Midland Station was pretty rare. There was a daily express freight working from Birmingham to Carlisle/Glasgow that always went through, but this was very much the exception.”

While unable to construct a new line over a weekend, Network Rail and their contractors have nevertheless, achieved quite a feat of re-engineering in a matter of days. Matt Rice, the route director in the area for Network Rail, paid tribute to the teams on the ground, and said getting this far, this quickly was “testament to the hard work of our teams, however there is still a significant amount of work to do.” Addressing the public and the industry at large, he expressed gratitude “for your patience whilst we carry out recovery and repairs.”

The low-speed incident did not injure anyone, but rendered almost all of the station inaccessible. Broadly, passenger services are running, but some are reduced in frequency, with the prudent message from operators to check before travel for the next few days. There is no further indication of disruption to freight services, although the rake involved in the incident will likely be out of service, at least in part, until fully assessed.