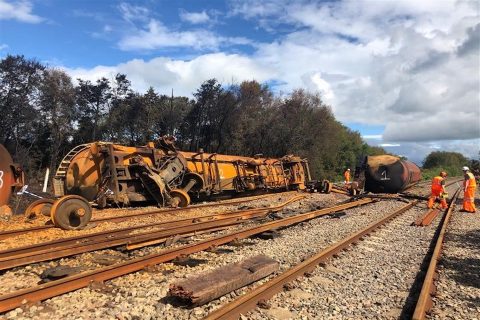 Major routes wrecked by recent derailments and landslides will be out of action for months, says a report. Some locations will not be repaired until Christmas. The city of Aberdeen could face disruption for most of the rest of the year, and oil terminal managers in Wales are scratching their heads over diversionary routes.

The British railway network has been battered by unseasonal storms and a series of derailments, that culminated in the tragic fatalities at Stonehaven in the North East of Scotland, as reported on RailTech.com. Although there followed a potentially even more serious incident in Wales, involving a heavily-laden fuel-oil train, the headlines have been grabbed by the passenger derailment that took three lives on 12 August.

The main line extending the East Coast service from Edinburgh to Dundee and Aberdeen was washed away in a landslip just ten miles (16 kilometres) south of its final destination. So remote is the actual location of the crash, that the derailed passenger train is still in situ, and removal is not scheduled to start until this week. Engineers have described the task as delicate. Once cleared, the reinstatement of the line can begin. Operational estimates are that it will be closed until sometime in October. However full assessment can only really be made when the site is inspected.

The rolling stock at Stonehaven was partially destroyed by fire, as were the tanker wagons, lost in the Welsh derailment fourteen days later. While mercifully there was no further loss of life at Llangennech, the recovery operation there has also been described as complex and challenging. The intensity of the fire did severe damage to the permanent way, and the spillage, which has been estimated at 330,000 litres of diesel, has done significant environmental damage – finding its way into sensitive wetlands and river courses nearby.

The Welsh derailment has blocked the Mid-Wales line and hampered the line to Milford Haven oil terminal, where the train originated. The Mid-Wales line had already been breached by a landslip at another location, but residents and operators were expecting services to resume imminently. Those hopes have been dashed.

The Stonehaven accident entirely blocks the line south from Aberdeen, and passengers face a direct but lengthy bus journey instead. The only diversionary route for freight is via Inverness, adding a reversal and well over 100 miles (160 kilometres) to any working. That may be possible for goods flows from the city docks – among them a recently inaugurated service carrying calcium carbonate slurry from Aberdeen to Spalding in Cambridgeshire, England – but clearly that is a huge operational expense and headache. However, even that alternative is complicated by significant damage in Central Scotland, where a canal collapsed and destroyed around 500 metres of main line between Glasgow and Edinburgh. So extensive was the flood damage, initial assessments are indicating that it could take two months to reinstate the line.

Although not determined if there were earthworks involved in the Llangennech derailment, several other locations on the network have also been undermined in recent months. Scunthorpe steel works was partially blockaded earlier this year by such an incident. Ironically, it is the long products plant where much of the country’s rails are manufactured.

There have been several incidents where both freight and passenger workings have struck or narrowly avoided landslip incidents. Flooding too, such as the spectacular inundation around Drax Power Station, has done long-term damage to the network infrastructure. In the aftermath of the Stonehaven tragedy, Network Rail has launched two independent task forces, to help it better manage its portfolio of earthworks. Both of the teams are to be led by eminent independent experts, with experience in climate and engineering.

Such task forces have been employed previously. A serious crash at Hatfield, just north of London in 2000, led to a vast programme of rail inspections and remedial work. If widespread defects are found in the condition of cuttings and embankments, there could be even greater disruption across the network. There is concern that, given  climate change, the infrastructure of the British railway system may no longer be capable of withstanding more extreme weather conditions, such as those experienced in the first half of this year.

“The Stonehaven tragedy resulted in three people losing their lives – this is a stark reminder that we must never take running a safe railway for granted”, said Andrew Haines, Network Rail chief executive. “With more and more extreme weather and tens of thousands of earthwork assets across Great Britain, our challenge is massive. While we are making record investment in these areas, we have asked world renowned experts to help us address these issues as effectively as possible, and at pace.”

With safety an equally important aspect for passenger and freight operations, the outcomes of both accident investigations, and the task forces’ findings, will be keenly awaited. They will be expected at pace as well.