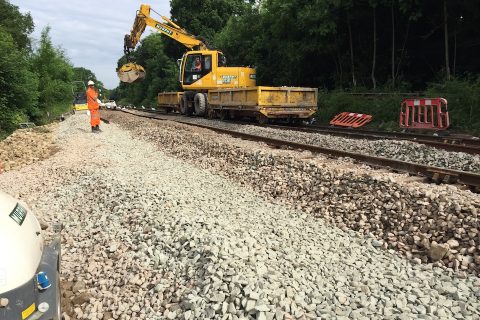 A weekend landslip has closed lines through the Lincolnshire town of Scunthorpe, in the north east of England. Freight rolls on, including steel from the local plant and biomass fuel trains from the nearby port of Immingham. However, diversions are in place.

In an update this morning, 17June, Network Rail’s Matt Rice, their Route Director the North and East Route, said: “Since the landslip was discovered on Friday, our teams have worked around the clock to monitor the area and assess what is needed to repair the damage – all while keeping passengers moving safely on the line between Doncaster and Cleethorpes and by reopening another line to allow freight trains to divert around the site.

“Those site assessments are now complete and the safest, quickest way to repair the damage is to close the line for seven days to allow 24 hours a day work to take place that will see the line returned to full speed and full capacity by 25 June.”

Freight operations which have demanded some rethinking and rerouting include oil refinery trains run by Colas and Freightliner to Preston and Ipswich, and trips run by DB Cargo for British Steel and Immingham Docks. All services are now routed via an alternative route to the south, via Brigg and old English market town of Gainsborough. Services, including trains of biomass fuel, imported via Immingham Docks and bound for the Drax Power Station complex, are diverting through the town to avoid the landslip in neighbouring Scunthorpe.

The Brigg line had been mothballed since 23 March, due to the suspension of passenger services in the current pandemic.  However, signallers have been keeping route knowledge up to date, and diversionary plans were readily implemented. Network Rail say the Brigg line will close again once repairs are complete at Scunthorpe.

Diversion for the Drax-bound bulk trains means an approach to Doncaster from the south, in order to gain access to the usual, if somewhat circuitous, route to the power station. The diversion does require a short five mile (eight kilometre) run on the East Coast Main Line. Under normal circumstances using that busy corridor may prove challenging. However, with reduced timetables in operation for passenger services, additional paths are available.

Services from the Scunthorpe plant of British Steel Limited will face a slightly more challenging reversal, but the company is confident that should do no more than provide a grandstand view of co-ordinated freight operations. “The disruption to our Scunthorpe site has been minimal,” says Rachel Lawrence from the company. “Freight diverted and no impact on production”, she says.

The location the landslip, which is to the west of the passenger station, leaves the steel works with an easterly access only. A relatively routine reversal is required at Barnetby to gain access to the preferred diversionary via Brigg and Gainsborough.

“There was a small landslip in the Scunthorpe area at the weekend”, said a spokesperson for Drax, the company operating the iconic power station nearby. “Network Rail has closed the line to allow repairs to take place”, read a brief statement over the weekend. “We have been advised this will take around ten days so hope you enjoy seeing our trains of sustainable biomass from Immingham passing through Gainsborough for a short period.”

Freight traffic has changed over the decades in the north of Lincolnshire. In the 1950s, the area was heavily industrialised, mainly by the power generation industry. The typical working changed from lightly loaded agricultural products to heavy coal and steel trains. The region still retains some of that heavy rail activity today. An oil refinery and nearby bulk terminal at Killingholme are rail connected, along with several other smaller installations.

Scunthorpe is the site of the steel manufacturing plant for much of Britain’s rail – the industry’s ‘long products’. The plant recently changed hands to become part of the Jingye Group of China. Network Rail, the UK infrastructure agency, says that the line may remain closed until 24 June, to allow repairs to be completed.