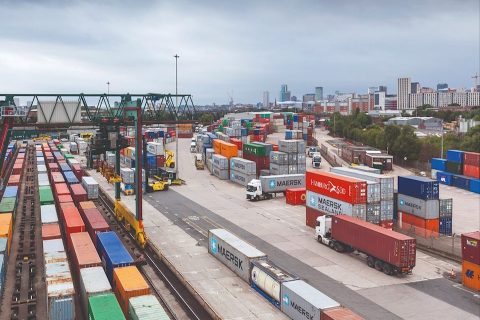 The UK Government must support shifting freight from road to rail for a greener economic recovery, says the rail industry representative body Rail Delivery Group. On behalf of its freight operator members, it is calling on the government in London to introduce policies that will improve infrastructure and connectivity resulting in increased use of rail freight.

Speaking on behalf of their freight operator members, the Rail Delivery Group (RDG) says a modal shift from roads to rail will grow the economic and environmental benefits across the UK. They say rail freight already delivers 2.45 billion British punds (2.71 billion euros) of economic benefits to the UK. The environmental benefits, say the RDG, removes the need for seven million lorry journeys a year.

Following the publication of the long-awaited and retitled Williams-Shapps Plan for Rail and its positive endorsement of the role of rail freight, freight operator members of the RDG are calling on government to boost the economy and the environment by adopting policies that will help shift freight from road to rail.

In its ‘Rail Freight: Building a stronger, greener future for Britain’ report, published today, RDG outlines a series of policies the government should support if it wants to reduce congested roads and cities, support the levelling up agenda and achieve net zero carbon emissions by 2050.

Make the best use of capacity

Research published earlier this year by RDG – and highlighted in a special edition of RailFreight Live, showed that rail freight delivers 2.45 billion British pounds (2.71 billion euros) in economic and social benefits to the UK every year. In addition, each tonne of freight transported by rail produces 76 per cent less carbon emissions compared to road transportation with one freight train replacing the equivalent of up to 110 lorries. Altogether, rail freight removes the need for seven million lorry journeys a year.

To help shift more freight on to rail and off the roads, RDG’s freight operator members are calling on the government to make the best use of capacity on the network, using a benefits-led assessment that considers the relative value of different capacity choices and which maximises the opportunities for getting more freight on each train.

Incentivise the shift from roads

With the long-term viability of the network in mind, they also want to upgrade Britain’s infrastructure to make it fit for the digital age. According to the RDG, that will allow both freight and passenger trains to run more efficiently. Robert Nisbet, Director of Nations and Regions for the RDG said that the role of the rail freight group has been paramount in the last year and a half. He wants the government to reflect that fundamental importance with a fresh commitment to the sector.“Throughout the pandemic the railway has played a vital role in transporting goods and keeping supermarket shelves stocked.”

“As we enter the recovery phase, our roads and cities are once again becoming congested”, added Nisbet. “If government wants to realise its commitment of net zero in 2050 and grow the economy, it has to put in place the policies to incentivise the shift from roads to railways for both goods and people.”

RDG wants the government to work with the rail industry to incentivise businesses to switch their goods from road to rail. They want to have established an efficient logistics sector which has hubs and terminals in the right places, with strong rail connectivity to help avoid a road-led recovery.

“Commit to investing in the infrastructure required to decarbonise rail freight including a long-term programme of electrifying the railways”, says RDG. “Ensure that the future industry structure supports rail freight growth and unlock continued third-party investment that will allow rail freight operators to deliver greater long-term economic and environmental benefits.”

Why, why, why aren’t we using rail to transport goods?! It’s more environmentally friendly, direct and it would free the motorways from never-ending lorries which are largely to blame for traffic congestion and a danger to the motorist.

I remember freight trains – it beggars belief that with climate change agendas that the government aren’t pushing for this. Surely, it’s not that complicated?!