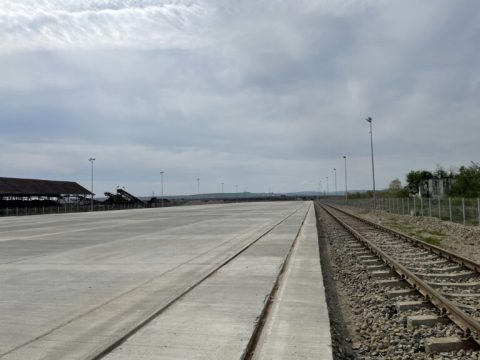 An intermodal terminal in Teiuș, central Romania, is the latest addition to the country’s rail freight infrastructure. Owned and managed by Unicom Tranzit, a private rail freight carrier and forwarder, the terminal was completed in Q2 of 2022 and already has a link running to and from Milan.

“Teiuș Terminal is one of the most important Unicom Tranzit projects in the intermodal sector, having a strategic position in central ​​Romania, with direct access to the pan-European network and the national motorway network. An advantage of the terminal is the positioning on the IV railway corridor, currently being in the process of modernisation, which will increase the speed of freight trains up to 120 km/h. This will result in a fast route between Curtici and Constanța”, said the Romanian company.

The Teiuș intermodal terminal has been under construction since 2021 and was recently completed. Despite being a new addition to the Romanian rail network, the terminal already has a stable weekly connection to Milan. However, it plays a critical role in transit between the port of Constanța and the Vadul Siret border crossing with Ukraine that serves 2-3 weekly trains.

Unicom Tranzit has more short-term plans since it aims to launch a direct link between Teiuș and Constanța that will run once per week, while it already examines the increase of trains to the direction of Milan with one more weekly train.

By the end of 2022, the company will connect the new intermodal terminal with Germany. Specifically, Duisburg will be Unicom’s gateway to central-western Europe. Even though the terminal is already active, its official inauguration will take place on 15 June.