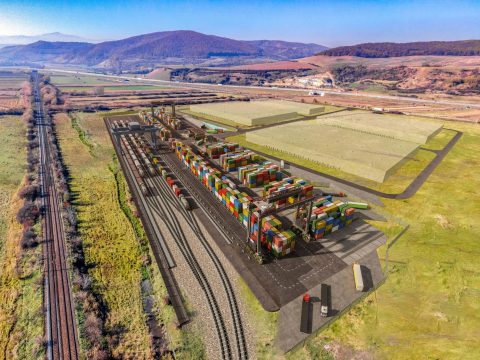 A new multimodal logistics terminal in Aiud, Romania, is in the pipeline. DP World started the construction stage on Wednesday, 4 May. Located in the region of Transylvania, the terminal “will perform a key role in expanding the country’s global trade and benefitting local businesses with smooth connections to consumers across the region and across the world”, commented the company.

Over 50 per cent of Romania’s industrial GDP comes from the wider Transylvania region, where Aiud sits, explained DP World. As a result, its position makes it an important crossroads for rail transport since it can assist in boosting product exports but also function as a hub for better rail connectivity between the region, Black Sea ports and the rest of Europe.

DP World underlined in a LinkedIn post that with the new terminal’s construction, the company will “further deepen its end-to-end offering in the country and help connect Romanian manufacturers to their customers”. More importantly, the company firmly believes that the terminal infrastructure will improve rail connectivity between Romania and other European hubs.

“The logistics terminal links Northern Romania, which has traditionally lacked robust infrastructure, with the rest of the country. Moreover, it brings the region closer to the Black Sea, the North Sea, and the Adriatic Sea using green electrified rail”, commented DP.

Romania’s terminal infrastructure on its Eastern border with Hungary is not that bad. Terminals like in Arad or Oradea are essential for traffic to and from Central and Western Europe. However, the specific region where Aiud locates was some sort of a missing link. Even companies using the Middle Corridor route via Romania faced hurdles with rail transport since the connections and infrastructure between Constanta and the border were insufficient. Maybe such a terminal will make the difference in this sense.

Speaking of the Middle Corridor, DP stressed that the terminal also “sits directly on the train line linking Europe to China via Central Asia”. Interestingly enough, DP World owns a terminal at the port of Constanta, making it understandable why it sees an opportunity for more investments and connectivity.