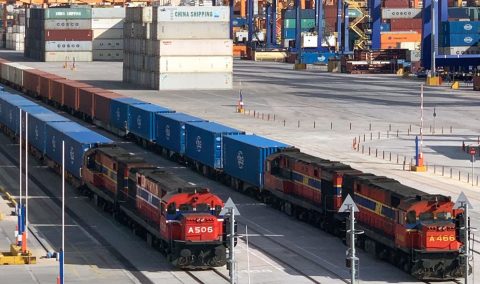 COSCO Shipping Lines Romania is closely looking at the possibility of launching a container train service between the Greek port of Piraeus and Romanian terminals. This is a response to the heavily congested port of Constanta, which receives the bulk of Middle Corridor volumes on their way to Europe. A train service to and from Piraeus would streamline container traffic, explained Cătălin Petre, deputy general manager of COSCO Shipping Lines Romania.

Petre shared the possibility of a rail connection between Greece and Romania offered by COSCO Romania in an interview with the Romanian website Tranzit. He explicitly mentioned that the train service is not launched yet and is still in the design stage. “The shipowner’s interest is to continue the transport of large volumes through the Port of Constanța, but also to provide an alternative solution, with a shorter transit time, with direct delivery or takeover to or from the centre or west of the country,” he said.

“The train could arrive from Piraeus in two or three days, depending on the conditions of the railway infrastructure, thus ensuring the connection to o Bucharest, Ploiești or Arad terminals continued Petre.

The Romanian division of COSCO is not the only one considering a rail connection between Greece and Bulgaria. This was a long-expected development for Ocean Rail Logistics, COSCO’s rail freight subsidiary in Piraeus. The Greek company operates on Corridor X, connecting Piraeus with Central Europe through the Balkans. However, transiting through Bulgaria and reaching Romania has been on its wishlist for years but delayed due to additional operational costs.

The Greek and Bulgarian governments also back the development of rail lines that will extend between Greece and Romania through Bulgaria. Romania is becoming a hub gradually for Balkan rail freight since it is also the main gateway to Europe for traffic coming from the Silk Road. An alternative railway service between Piraeus and Romania would de-congest Constanța but also strengthen connectivity between the two crossroads extending to Northern Europe and Asia.