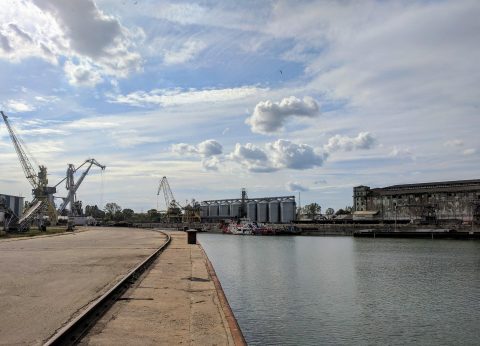 Rail investments in Romania ramp up to facilitate Ukrainian exports

The Romanian transport Minister Sorin Grindeanu announced that works will be soon underway to restore the broad gauge railway line between Giurgiulesti in Moldova and the Romanian river port of Galați. The transport ministry has launched a tender for the line’s repair, which is open until 19 May. After signing the contract, the line will be ready for operations within sixty days, underlined Grindeanu.

“This railway line will allow the transport of goods to and from Ukraine, via the Republic of Moldova, through the Port of Galați. Thus, the Danube port will become, along with the port of Constanța, one of the key points in the region for transporting goods and raw materials”, explained the Romanian Minister. Works will cost 1,289,000 Romanian lei (approximately 260,000 euros) and will be funded by the Romanian railway infrastructure manager CFR Infrastructură.

The port of Galați is the second largest Romanian port after Constanta and is located on the Danube river, next to the border with Moldova and Ukraine. The main benefit of this location is that it can serve both the broad and standard railway gauge. The old Soviet line linking Giurgiulesti from Moldova to Romania will be the gamechanger in this case since it will make the transit of Ukrainian trains operating on 1,524 mm gauge (broad) easier when entering Romania.

From the port of Galați, cargo entering Romania can either get transhipped on barge lines navigating the Danube towards the sea or continue by rail using the standard gauge this time (1,435 mm) to other destinations in the country and Europe. The Romanian transport ministry aims to reconstruct around 5 kilometres of rail lines in total; 3,5 kilometres of them are broad gauge and 1,2 standard gauge lines.