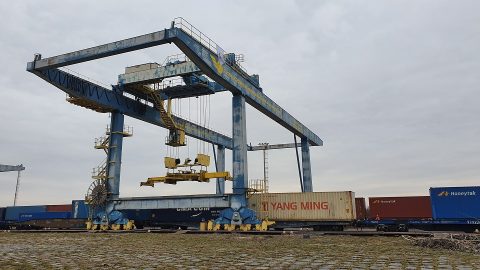 Published on 05-03-2020 at 09:58
Container train from China at intermodal terminal in Dobrá, source: ZSSK Cargo

After the withdrawal of TransContainer, the Slovak intermodal terminal in Dobrá has got a new tenant. Local logistics company Bulk Transshipment Slovakia (BTS) leased the facility for a 10-year period with an option for five more years. The new lessee continues to handle container trains from China.

“BTS took over the management, marketing and operations of the facility on 1 January 2020”, Slovak national rail freight company ZSSK Cargo stated. The new rental agreement was signed for 10 years with a prolongation option for five years. “The intermodal terminal in Dobrá has been waiting to show its potential for 20 years. As a shareholder of Bulk Transshipment Slovakia, we intend to achieve its potential and growth in accordance with the market demand”, said Ľubomír Loy, member of the board at BUDAMAR LOGISTICS.

BTS, as a new tenant of the intermodal terminal in Dobrá (also known as TKD Dobrá), plans to launch a new container trains from/to the facility as well as to continue the loading operations for the existing connections. The company regards Ukraine as a possible new destination. To this end, it is interested in starting a container train from Kyiv to Dobrá.

As for the existing connections, BTS has already succeeded in this area. In mid-February, the Dobrá terminal transhipped 46 containers from Xi’an to Dunajská Streda, an intermodal facility of Metrans in the vicinity of Bratislava.

BTS was incorporated in 2007 as a joint venture of BUDAMAR LOGISTICS and ZSSK Cargo. Two years later, the company started its operations at the Čierna nad Tisou railway station, located at the border with Ukraine. BTS owns 33 locomotives for the European gauge and 3 units for the broad gauge.

The company tranships freight from broad gauge wagons to the units running on the European gauge network as well as to lorries. Before renting TKD Dobrá, BTS had been focusing on bulk and general freight. With the new deal and new facility, this list was extended with the containers.