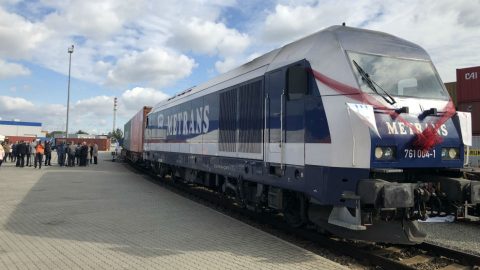 Slovakia connects to China with new route via Ukraine

Metrans has launched a new regular rail freight service from the Chinese city of Xi’an to Dunajska Streda, near Bratislava in the west of Slovakia. The train runs via Dobra and firstly arrived in the Slovak terminal on Wednesday 3 October, where it was immediately forwarded to the final terminals of Prague, Ceska Trebova, Budapest and Krems.

The total transit time of the journey from Xian to Dobra in Slovakia was fourteen days and the train consisted of 44 40ft containers for different clients, and with different cargo. This included LCL shipments, said Martin Koubek, business development director – Silk Road at Metrans. BTE provided the traction to the Slovak terminal, whereas the final rail leg was carried out by DBO Bahnoperator. The service runs once per week in one direction; the empty containers will be transported to Budapest, where they will be shipped to Xiamen in China.

The final rail terminals are in most cases not more than 150km away from Dunajska Streda. “Clients using this service could enjoy delivery through the whole CEE region and Metrans terminal network. It is also appreciated by the governments of the respective countries as we do not need to resort to trucking for long distances.”

The Xi’an-Dunajska Streda train is a successful example of a route on the New Silk Road that runs through Ukraine, a much more strategic transit route for end destinations in eastern Europe than via Belarus and Poland. Although relatively new, various players have expressed confidence about the route, despite political tensions in the county.

“The transport through Ukraine was more than competitive, as transit time was some 32 hours. Customs procedures and train takeover at the Russian border happened very quickly; within some 6 hours”, said Koubek. “We see big potential in this route. Customs procedures may be something that requires development, but as far as I have heard Ukraine is willing to join the European customs NCTS system in the near future. From this perspective, it may become even easier to transport trains via Ukraine.”

Metrans also runs a weekly train from Xi’an to Ceska Trebova, its terminal in Czechia. This service runs via Poland and enters Europe at the border Malaszewicze-Brest. This is the regular route on the Eurasian corridor.

Slovakia aims to become an important transit country on the New Silk Road. To be precise, it wants to acquire a share of at least fifty per cent of all railway traffic between Europe and China, and it is able to facilitate such volumes. The railway network has sufficient unused capacity, and an even larger spare transloading capacity, the government points out.

The route through Slovakia currently offers spare transloading capacity of approximately ninety per cent, in addition to sufficient free capacity for the transit of trains through Slovakia. Slovakia can handle about 25 more complete trains per day, the Slovak Ministry of Transport and Construction said earlier.

Do you want to know more about the New Silk Road and its latest developments? On 26 and 27 November the European Silk Road Summit takes place in Venlo, the Netherlands. At this two-day international event more than 35 speakers and around 250 delegates will share their experiences, expertise and latest news.

Registration for the event is now open. The programme and speakers can be found on the website.

Good afternoon to whom it may concern,

I would like to kindly ask for proposal Your capabilities, transit time, prise eventualy solving a custom´s clearance and price for following: