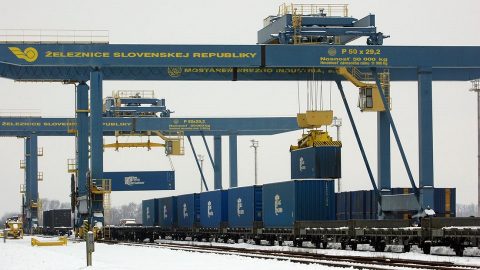 Russian logistics provider TransContainer is no longer interested in renting the intermodal terminal in Dobrá, Slovakia. In this regard, the company has decided to liquidate TransСontainer – Slovakia, its subsidiary in this country. This intermodal facility is the only asset of TransContainer in the European Union.

The decision to close the Slovak subsidiary was adopted by TransContainer’s Board of Directors at a meeting that took place on 14 February and unveiled last week. TransСontainer – Slovakia will be liquidated, the Board said. As a result, the rental agreement for Dobrá terminal will be aborted five years earlier. Initially, TransContainer had planned to operate the facility till 2024.

The main reason for the company’s decision is the political and military tensions between Russia and Ukraine as well as the focus of Russian logistics companies on the routes running via Belarus and Kaliningrad. “Due to the development of transportation on the China-Dostyk-Brest-EU route and more attractive tariff conditions, some transit container traffic has shifted from the Dobrá terminal to the Brest terminal. This resulted in a decrease of the volumes of container transshipment at the terminal in Slovakia”, the Russian newspaper ‘Commersant’ quoted an anonymous representative of TransContainer.

On the way to Vienna

The intermodal terminal in Dobrá is located 10 kilometres from the Ukrainian border. It has four broad gauge and four standard gauge lines. Therefore, it is convenient for the transshipment of containers between different types of rolling stock. The terminal has a capacity for handling 250,000 TEU a year. In 2008 TransContainer rented the facility for a 15-year period (until 2024). A year later, it incorporated a subsidiary to operate it.

At the same time, Russian Railways (RZD) announced its intention to construct a broad gauge railway from Košice, the second-largest city in Slovakia, to Vienna. Despite the fact that Dobrá is located 90 kilometres southeastward from Košice, RZD was regarding it as an important part of that project. Eventually, the design and construction of the planned railway was been postponed. However, the Russian officials including the CEO of RZD continue to emphasise the importance and interest in this project, even though its future remains unclear.

It is worth to add that the first container train from Asia to Europe arrived at the Dobrá facility in November 2009. 20 containers from Inchon, South Korea, were transshipped in Dobrá  and continued their way to Wrocław, Poland. The entire journey via China, Russia and Ukraine took 23 days, including the shipping connection between South Korea and China. As of today, the containers to Wrocław and other Polish cities are running via Brest or the broad gauge Metallurgy Line (LHS).