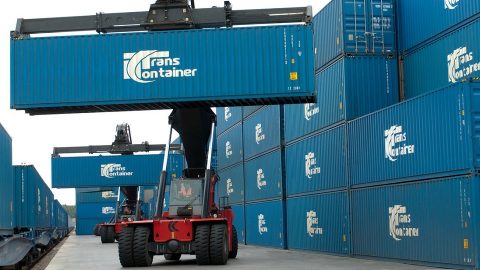 TransContainer, the largest rail freight service provider in Russia, has been transferred to a new main shareholder. The company’s major stake previously held by Russian Railways (RZD) was purchased at the auction by another logistics company Delo Group. The deal valued 60.3 billion rubles (850.6 million euros), almost twice as much as the initial price.

The bidding process took place in Moscow on 27 November. It was organised by investment company VTB Capital, part of state-owned VTB Bank. Initially, RZD asked 36.159 billion rubles (510 million euros) for 50 per cent plus two shares of TransContainer. Three participants were admitted to the auction:

As a result of the bidding process, the price of the offered TransContainer stake increased up to 60.3 billion rubles (850.6 million euros). Despite the numerous forecasts that Enisey Capital would win the bid, Delo-Center acquired the major stake.

“The final price significantly exceeds the initial one. We are not surprised by such results. TransContainer is an extremely interesting asset. Over the past three years, the company has increased EBITDA by three times and net profit by four times. This is one of the most interesting and fastest-growing companies in the transport sector”, said Andrei Starkov, Deputy CEO of Russian Railways responsible for corporate affairs, after the auction.

With the help of TransContainer, Delo Group intends to strengthen its position on the Russian intermodal market. “The acquisition of the largest container operator in Russia is an important strategic step for the development of the transport industry and for Delo Group.

Its presence in the three basins and the majority share in the leading Russian container shipping industry will enable Delo Group to become a national logistics transport integrator. We are considering all options for the strategic development of the new asset and for Delo Group with confidence in a sustainable synergetic effect”, said Sergey Shishkarev, President of Delo Group.

Currently, the intermodal business of Delo Group consists of three directions: DeloPorts (operating terminals at Novorossiysk port on the Black Sea), Global Ports (a joint venture with APM Terminals focused on the intermodal operations across Russia) and RUSCON (a multimodal operator aimed at delivering containers throughout Russia and to the neighbouring countries). TransContainer will be a valuable addition for the latter goal.

According to the bidding terms, the new owner canot resell the acquired TransContainer’s stake within the two-year period. Otherwise, it must pay a fine at a rate of 25 per cent of the concluded deal. Also, Delo Group is obliged to develop the intermodal activities of TransContainer. If the latter reduce its business and payments to RZD for using its rail infrastructure, the new owner will pay another fine. It will be calculated as a difference between the planned and actual figures.

The other TransContainer’s shares are controlled by a few other holders. As we mentioned earlier, 24.74 per cent is owned by Enisey Capital. Almost the same stake, 24.84 per cent, is managed by VTB Bank. The financial institution acquired it a year ago from FESCO. Some Russian media report that VTB Bank signed a forward contract with Enisey Capital for selling its stake. If these rumours come true, Enisey Capital will increase its interest up 49.58 per cent. The remaining shares of 0.43 per cent are owned by individual investors.

TransContainer was established in 2003 as a subdivision of Russian Railways. Since 2006, it was operating as a separate company within the state-owned holding RZD. After the initial public offering in 2010, the RZD’s stake has been shortened to 50 per cent and two shares. They were controlled via UTLC ERA. TransContainer owns 61 intermodal terminals in Russia, Kazakhstan and Slovakia. The company’s fleet includes 27,819 flat wagons, 427 lorries, 211 loading machines and 74,118 containers. In 2018 it transported around 1.9 million TEU.