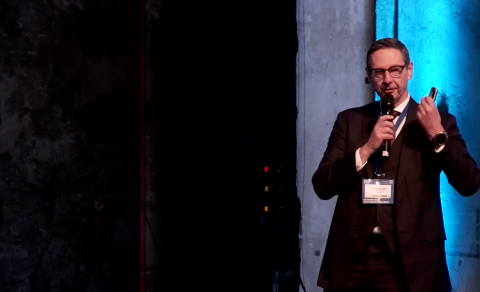 The potential of the Middle Corridor should be seen from a more regional perspective. The potential for northern and western markets is relatively small, but for central and eastern Europe, and for Central Asia, the corridor makes sense. This opinion was shared by APM Terminals and DP World at the European Silk Road Summit, which was held on 8 & 9 December is Duisburg.

Ever since transit through Russia has become an option that not everyone wishes to choose, the Middle Corridor has been at the centre of attention. A lot of interest goes out to the alternative route via the Caspian Sea, but the transit times and cost of the route are not competitive, would a lot of people say.

But this needs to be taken into perspective, believes Alexandru Craciun, head of marketing and governmental affairs at DP World. DP World has established two regular rail freight connections from the port of Constanta to the hinterland; one to the border with Hungary and another towards Ukraine. “It only makes sense to bring cargo via the Middle Corridor to Constanta if your destination lies in Eastern or Central Europe. In times of crisis, the corridor can be used for cargo to western Europe”, he said at the summit.

The Romanian professional presented the new routes that will be kicked off next year. The first will run between Constanta and Dornesti on the border with Ukraine. As soon as next year, DP World is ready to provide five departures per week. Each train carries 50 containers, and the transit time is about 36 hours. “We set up this route as soon as the war broke out, because we saw that a lot of Ukrainian cargo piled up at the port of COnstanta.”

The other route runs between the port of Constanta to the DP World terminal in Aiud, on the way to Curtici near the border with Hungary. From Aiud, DP World also offers scheduled trains. The location has a lot of potential, as cargo can be shipped to many destinations in the region, Craciun explains.

Central Asia and the Middle Corridor

On the other side of the Black Sea lies another region with a lot of potential, points out Ian Rawlinson, CCO at APM Terminals in Poti, Georgia. Also he believes that the Middle Corridor as a link from China to western Europe is debatable, however, looking at Central Asia as a destination, or point of origin, makes a lot of sense.

“If you look at a journey by sea from Qingdao to Almaty, via the Suez Canal and Black Sea, this easily takes two to three months. By rail, this takes 12-14 days. SImilarly, if you look at a journey from Hamburg to Almaty via the ocean, the transit time is one month. Take a train, and you can take ten days off. You are looking at a very attractive product.”

Central Asia as a market, not transit region

If you ask Rawlinson, Central Asia as a market in its own right has long been invisible to the world. “It has always been considered as a satellite region of Russia. However, the region is very western centric. There are a lot of western companies settled in Central Asia, and there is a strong drive for western products.

“APM considers Central Asia as the last containerisable region, with the biggest potential in terms of logistics. As it is landlocked, it is only reachable by rail. Kazakhstan for example exports 60 million tonnes of cargo to Europe. Much of it is still moving through Russia, but thai can be changed to the Middle Corridor. This is also true for eastbound cargo to Kazakhstan.”