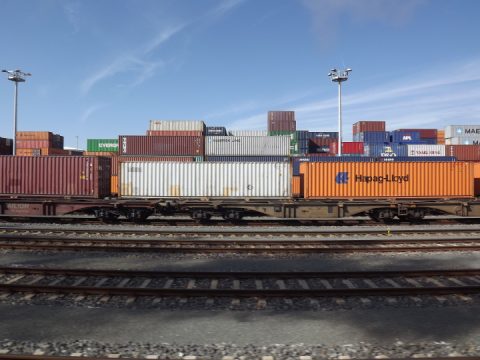 The frenzy noted lately around the International North-South Transport Corridor is not only limited to Russia’s benefits through it. The INSTC has been projected as the Russian lifeline during the past months after the western sanctions imposed on the country. However, there is more to be gained since, according to the Eurasian Development Bank (EDB), the corridor can become the key to new Eurasian logistics services and routes given the proper investments.

A report published by the EDB in late October stresses the importance of the INSTC, mentioning that the corridor has a huge unrealised potential. This remark makes sense since the corridor has been in the spotlight for more than a year. The routes were already there but were overlooked, with Russia mainly reaping the fruits of China-Europe rail traffic.

When Nurminen Logistics from Finland launched their first block train linking Helsinki to the Indian port of Nava Sheva via Russia, Azerbaijan and Iran, the rail freight industry started buzzing about the corridor, which came into the foreground. For many, this was a brand new transit option opening up rail and multimodal routes to new markets like India. For others, mainly regional players, the development was not a surprise, mainly because they were well aware of the corridor’s bottlenecks that would take some years until resolved and make the route 100 per cent operational.

It wasn’t until Russia started turning its attention to alternative transport routes and alternative markets to export its products that INSTC began to look attractive. Indian and Southeast Asian markets became expansion targets while keeping a good relationship with China. As a result, the INSTC became the main gateway, at least for rail, to these markets.

With multiple test trains and services deployed via the different branches of the corridor (West, Central and East), Russia took its time to explore the best possible transport scenarios, with the Eastern and Western INSTC branches becoming the optimal options. In fact, RZD announced the first regular container train service via the Eastern branch a few days ago with the first monthly roundtrips set up via Kazakhstan, Turkmenistan and Iran on the way to the Indian Nava Sheva.

For EDB, studying the International North-South Transport Corridor means locating the main bottlenecks and proposing respective investments. Surprisingly enough, despite the corridor “having a huge unlocked potential”, the proposed investments are, at least partially, coordinated with the investments involved countries undertake.

For instance, EDB identified the Rasht-Astara railway line as a critical missing link to develop INSTC’s Western branch via Azerbaijan. At the same time, Russian, Iranian and Azerbaijani representatives are finalising the project’s overview, which will complete in 2023. Specifically, last week a Russian-Iranian working group concluded that the Russian investment in the rail link is almost official and that only some final touches, like the financing options, remain for the deal to seal.

Other relevant investments that EDB identified and could be addressed in the imminent future concern the “construction of second main tracks and electrifying railway lines in Azerbaijan, Iran, Kazakhstan and Turkmenistan; construction of bypass roads around the cities, upgrading inland waterways and channels and developing container and general cargo terminals in Caspian ports; modernising border crossing points and constructing logistics centres and roadside service facilities”.

Regarding the logistics centres mentioned above, some progress is already made. For instance, as part of the Rasht-Astara line completion, Russians aim to build a logistics hub in Astara on the Iranian-Azerbaijani border. On the other hand, the same could apply to Sarakhs, located on INSTC’s eastern branch, which is the entry point between Turkmenistan and Iran. As for the rest, additional tracks and electrification seem to be the main priority, with border-crossing modernisation and container and cargo terminal construction in Caspian Ports following.

EDB concluded that the corridor’s Western branch transiting via Azerbaijan and Iran will “receive the bulk of investments (69 per cent), with the Eastern route and the Trans-Caspian route getting 12 per cent and 19 per cent, respectively, since they require fewer capital expenditures to reach their full potential compared to the Western route.”

Not just for Russia

Nevertheless, even with Russia currently being the protagonist of investments in the route, the whole Eurasian transport and logistics network could benefit from them in the long run. EDB says that the corridor could “easily develop meridional transport links between North-East Europe and South Asia and create new transport and logistics chains along the interconnected Eurasian international transport corridors, particularly between Russia and Turkey through Azerbaijan and between China and Iran through Kazakhstan and Turkmenistan.”

Moreover, the bank stressed that the INSTC could transform into the key element of Eurasian transport functioning as a connecting point of North-South and East-West services that include Central Asian, European, Asian and Middle Eastern Countries. Of course, there is still a long way to go before reaching this point. Be it geopolitical challenges or infrastructure and digitalisation bottlenecks, much work is still to be done.

Yet, things could become more manageable with some critical infrastructure works and the modernisation of border crossing procedures. The corridor’s coordination is another sensitive point, also thinking in the context of the Middle Corridor that faces the same hurdle keeping it from developing more. One could think “first things first,” though, meaning that some substantial steps are already made, and such issues could potentially find solutions in the future. Given that relative geopolitical stability returns to the Eurasian region, investments will also speed up, and the corridor will grow more. In the end, no matter how far-fetched some plans might seem, maybe the INSTC is the real winner of the race for alternative routes opening up a whole new spectrum of markets and services.

You can find the full report of the Eurasian Development Bank here.