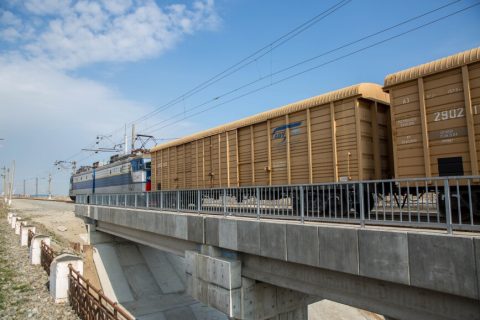 The reconstruction of the Sumqayit-Yalama railway line in Azerbaijan is proceeding at a quick pace. After the first 23 kilometres that were inaugurated with a train in late February, another 31,4 kilometres covering the section between Sumgayit-Sitalchay were made available for operations.

The Sumqayit-Yalama railway line runs in both directions, and while constructions take place, one track is closed, and the other remains open to serve rail traffic. With the completion of the 31,4 kilometres section between Sumgayit-Sitalchay, the reconstruction of the first track is over, and works will proceed to the second one, said Azerbaijan Railways.

Why is this line important, though? First of all, it is part of the International North-South Transport Corridor, which passes through Azerbaijan. It connects the region of Baku, Azerbaijan’s capital, with the country’s northern border with Russia, and apart from the North-South transport corridor, the railway line is essential for the connectivity of the Abheron peninsula where Sumqayiand Baku are is positioned.

The Sumgayit-Yalama railway reconstruction project is a joint project between the Government of Azerbaijan, the Asian Development Bank, and the French Development Agency. Reconstruction work began on February 18, 2020, as part of measures taken to implement the North-South international transport corridor. Design, construction and work supervision are carried out by joint ventures from Turkey, Kazakhstan and Germany.