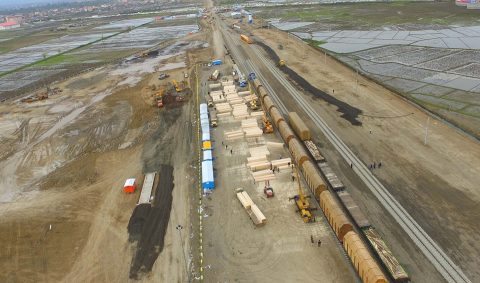 Following the trilateral ceasefire agreement between Russia, Armenia and Azerbaijan that ended the Nagorno-Karabakh war, Azerbaijan plans to revive a forgotten Caucasian rail link. Specifically, Azerbaijan wants to reopen a railway line connecting it with Nakhchivan, the country’s western exclave on the border with Iran. This development will not only be beneficial for Azerbaijan and connections of its afar territories, but also for Iran and Russia, which see an opportunity for better connectivity on the North-South corridor.

The line will serve more or less the same purpose in the present day, linking Russia with the Persian Gulf and further even with India. Works will include the reconstruction of approximately 100 kilometres of railway, which is in a relatively satisfactory state.

Since Russia took the lead in stopping hostility between Armenia and Azerbaijan a few months ago, it was also one of the first advocates to support the development of Azerbaijan’s rail and promote its transportation agenda. Iran also saw an opportunity in this scenario that would provide it with direct trans-Caucasian rail access. Consequently, the Nakhchivan rail line is a lobbying product between the most significant powers in the area.

However, Azerbaijan and Armenia will also see benefits from this line. Firstly, Azerbaijan will win since it will acquire a better connection between its hinterland and Nakchivan’s exclave. Until now, freight trains follow a much longer route that travels around the Azerbaijan-Armenia borders and along the border with Iran. This unpractical diversion will be succeeded by a vertical rail link with the new line, connecting the Julfa border crossing between Nakhchivan and Iran with the Armenian and Azerbaijani mainland.

The two countries have a great potential of becoming a vital crossroad on the Caucasus that will enhance connectivity in the North-South Eurasian corridor and open new opportunities for crucial transport players in the region.

What about the Baku-Tbilisi-Kars corridor?

The BTK corridor connects Turkey with Georgia, and from there, it reaches Azerbaijan. It constitutes a vital rail link for Eurasian transportation since it is a great alternative to other more congested routes and provides the opportunity to regional countries along the New Silk Road for significant development.

Nevertheless, with Nakhchivan’s rail link in the pipeline, the region’s status quo might be subject to changes. Both Azerbaijan and Armenia will acquire rail access to each other’s territories, and as a result, they will not require shortcuts through third countries. Understandably, the BTK corridor could lose much of its traffic and transported volumes.