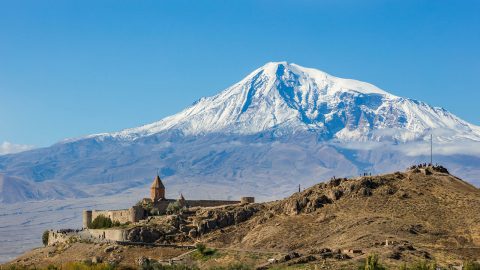 How an ex-war zone shapes the Russia-India corridor

ANALYSIS – The development of the North-South International Transport Corridor connecting Russia with India via Iran is on hold. Many said that the missing link for its completion, in this case, is Iran and its underdeveloped railway network. However, a grey zone between two Caucasian countries seems to cause more serious problems.

A prerequisite for the corridor’s development and further use is not only the construction of railway lines in Iran. Most importantly, to connect Russia with Iran and further to India, the corridor must pass through the Caucasus, where the countries of Armenia and Azerbaijan lie. This is where things get complicated because the rail link that will be used in this region now belongs to a disputed grey zone after the Nagorno-Karabakh war.

The two countries reached a ceasefire agreement almost a year ago, on 10 November 2020, following Russia’s intervention. However, to this day, their borders remain fluid, with both countries including disputed territories on their maps and development agendas. What applies to geopolitics also applies to the economy. And currently, no one knows what the future of the North-South Corridor will be if the two countries do not resolve their rivalry.

A week ago, multiple parties attended the launching of the first Rotterdam-Moscow shuttle in Rotterdam’s RSC terminal. Among the attendees, there were many representatives from Eurasian countries like Belarus, Russia and Kazakhstan. Armenia and Azerbaijan were there too. Both of them presented their rail freight development agendas. Azerbaijan’s representative emphasised that the Caucasian country invests heavily in the North-South Transport corridor and aims to transform the port of Baku into an international logistics hub as part of it.

However, when the Armenian delegate took the floor, the situation became more complex. He accused Azerbaijan’s representative of misleading the public by presenting the North-South Transport Corridor as a project coordinated exclusively by Azerbaijan and Iran. In fact, he underlined that the rail link to which Azerbaijan refers is positioned in a disputed area not belonging to any of the two countries. Moreover, he explained that Armenia signed a cooperation agreement with Iran to develop the corridor. So what is the truth, and are Armenia and Azerbaijan the only countries of influence in this matter?

Officially, both countries claim their role on the transport route. The ministry of digital development and transport of the Republic of Azerbaijan has a dedicated page explaining its role in the North-South Transport Corridor and its initiatives to develop it as part of an agreement with Russia, Iran, and India since 2005.

On the other hand, Armenia and Iran have also reached an official agreement on the same matter. Only, as we can see on the official website of Iran’s Ministry of Roads and Urban Development, this agreement concerns mainly road links that are part of the North-South Transport Corridor. Nevertheless, as Amir Asri from the Iranian company MAPNA Locomotive explained in an interview, the Armenia-Iran links could also extend to rail if the political situation allows.

Asri continued explaining that Iran is in a very sensitive but neutral position concerning the conflict between Armenia and Azerbaijan. “Due to the border fluidity, Iran faces problems with both countries currently,” he said. “The border with Armenia is closed, and we also have many issues with Azerbaijan since they posse restrictions to cross-border transportation via the disputed regions,” he continued.

Simultaneously, Asri explained that Armenia and Iran have very strong economic and transport bonds. That is why they recently decided to cooperate on the North-South transport corridor. Although this cooperation focuses on road links, “the countries also have a firm rail tradition that could become an extension of the current agreement,” he highlighted.

After all, from a purely business point of view, “Armenia is a better option for Iran when it comes to the North-South rail link”. That is because cargo can travel through Georgia and Russia via Armenia and access the Black and Caspian seas. On top of that, it is known that Iran needs some external investments to develop the rail links missing in its territories, and Armenia seems to be more willing to contribute since the cooperation with Azerbaijan is not very fruitful until now.

Power relations will determine the outcome

The conflict is there, and projects are on hold, but who will decide the outcome of all these? Russia will most probably become the game-changer, said Asri. Russia intervened to stop the war between the two countries in the first place, and it seems to have the same role in the current dispute. Specifically, Russia is the leading party concerned about developing the North-South corridor since it will benefit the most by expanding its Eurasian rail network.

Since it has a mediating role now, the country will unavoidably have to choose sides at some point and decide through which country it wants to connect with Iran. If Armenia is the first choice, then Iran will go with it too, since it will have a solid partner to invest in its infrastructure, underlined Asri. However, even this scenario is not certain.

Asri mentioned that Turkey is also looking for opportunities to invest in Azerbaijan’s railways. If this becomes a reality, then another big player will enter the political-economic arena of the Caucasus region. “We cannot exclude this option. Everything is fluid now, and we tend towards Armenia, but if Turkey and Azerbaijan provide a competitive solution, then Iran will consider their offer,” he concluded. Who gets to choose after all? It seems that the North-South Transport Corridor will rely on who makes the fastest and smartest move.