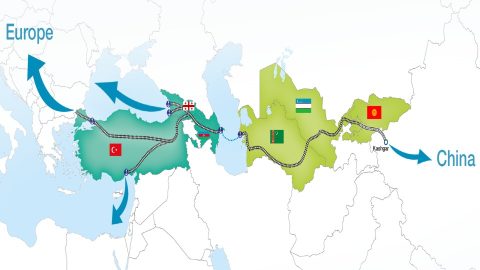 The two vessels will be operated by ADY Container LLC and Turkmenistan Transport and Logistics Centre OJSC. With their addition, weekly voyages from coast to coast will double, if, of course, weather conditions allow, since they are responsible for much of the bottlenecks in the region. Interestingly enough, according to the parties involved, the development is crucial to improve the links along the “Asia-Pacific-China-Kyrgystan-Uzbekistan-Turkmenistan-Azerbaijan-Georgia-Turkey-Europe transport route”. However, Kazakhstan, a central component of the Middle Corridor, is left out.

ADY Container explains that the route between these countries was first introduced in 2019. In two years, it has experienced immense growth. Specifically, “the volume of freight transportation on the route in 2021 increased by 101 per cent compared to 2020”, says ADY Container. All parties are in close cooperation to improve transport conditions even more. For instance, they aim to decrease the transit time from Turkey to Kyrgystan in 12 days.

Turkey was the latest addition in the route, which joined in December 2021. Understandably, the Baku-Tbilisi-Kars railway that the Turkish Railways and company Pasifik Eurasia have as a flagship could not be missing if the route wanted to expand from Azerbaijan to Europe.

However, Turkey seems to be setting its own rules in the region’s transport links. Since its launching, the Middle Corridor has used Kazakhstan prominently for transit in Central Asia. The dynamics are now changing, and the partners look to establish rail links with secondary regional powers, like Kyrgystan, Uzbekistan and Turkmenistan.

Turkey has declared openly its plans to become the leading player in Central Asia and the Middle Corridor. After all, in late 2021, its transport minister Adil Karaismailoğlu mentioned that Turkey aims to shift “30 per cent of the volumes passing through Russia and the Northern Route to the Middle Corridor via Turkey”.

Kazakhstan might not be Russia; however, it holds much of the Silk Road volumes, including these of the Middle Corridor. As a result, if Turkey wants to absorb more volumes, it sounds normal to target volumes transiting through this country to draw them directly to its infrastructure. The close collaboration with Azerbaijan Railways and its subsidiaries and the new transport deals along the Caspian Sea seem to point towards this direction.