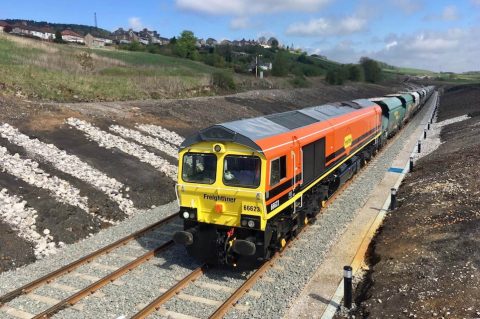 Freightliner and Tarmac build on relationship with new contract

The familiar names of Freightliner and Tarmac have signed a wide-ranging contract, cementing their existing relationship. The rail freight haulier will support a number of nationally and commercially important infrastructure projects around the UK. The deal is being hailed by both parties as a significant step in their commitments to environmentally sustainable industrial development.

Under the new contract, Freightliner will haul aggregates from Tarmac’s Tunstead site in Derbyshire as well as their West Country quarries, and including deliveries from Wales, Somerset, and Herefordshire. It will see Freightliner running an average of fifty trains a week for Tarmac. Cargo includes bulk materials such as aggregates and cement, for use in regional and national infrastructure projects.

Freightliner and Tarmac have a long-term, collaborative relationship under their respective belts. The construction company added sites in the South West of England to their existing working relationship, which involves moving materials from Tunstead in Derbyshire, in 2019. “We are delighted to have been awarded this new contract with Tarmac and to support their critical infrastructure projects such as HS2”, said Emma Dempsey, chief commercial officer in the UK and Europe for Freightliner’s G&W parent. “In addition, we continue to support Tarmac to achieve carbon neutral delivered product.”

Freightliner is a rail freight carrier with roots in the 1960s birth of intermodal operations in the UK and is now a subsidiary of the globally active US firm Genesee & Wyoming. Tarmac, a UK sustainable construction solutions company, is itself now approaching its second century in business.

Tarmac has been active in promoting its own transition to a carbon neutral business model, with Chris Swan, head of rail at the company, a keen advocate of greener technology and work practices. “The renewal of our contract with Freightliner highlights both our ongoing commitment to supporting the delivery of a lower-carbon built environment and the continued enhancement of our rail freight capabilities”, he said.

“Effective use of the rail freight network is key in supporting the UK’s transition to a net-zero society and supporting a green recovery as we emerge from the COVID-19 crisis. Collaborative working has a vital role to play in this and we are looking forward to working with our freight operating partners as the industry focuses on doing both more rail and better rail.”

Freightliner recently got behind major environmental initiatives, including suppling two newly acquired electric locomotives as backdrop for the formal launch of the Green Investment Portfolio by the Scottish government. The company has also showcased its clean traction credentials ahead of Network Rail’s announcement of its decarbonisation strategy, which will electrify the entire UK network over the coming three decades. “As the largest operator of carbon neutral traction, we are continually developing solutions to deliver decarbonisation targets, working in collaboration with customers”, added Dempsey.

As well as owning Freightliner, G&W also operate Pentalver, a UK container logistics services provider, which dovetails well with Freightliner intermodal operations. Pentalver operates off-dock facilities at Felixstowe, Southampton and London Gateway, along with an inland hub at Cannock in the West Midlands. Tarmac’s extensive operations and infrastructure involvements include the recently enhanced rail connections at their Dunbar cement works in the East of Scotland, and contact work on the vast London Tideway ‘super sewer’ project in the English capital. Tarmac has also renewed contracts with three other operators – Colas, DB cargo Uk, and GB Railfreight.