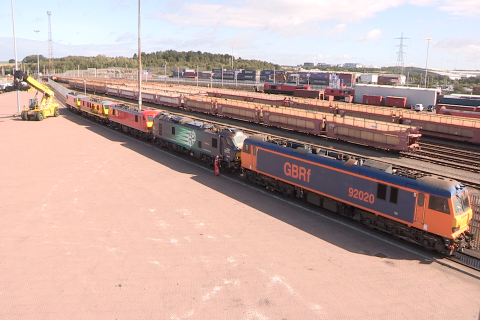 Major freight operating companies convened in the West of Scotland to show off their latest zero-emissions motive power. They joined forces to celebrate the launch of a government-backed initiative to promote market-ready projects that will help Scotland transition to a net-zero economy by 2045. Cabinet secretary for the economy Fiona Hyslop launched the project at Mossend International Railfreight Park, one of ten projects benefiting from the more than one billion British pounds (1.1 billion euro) package.

In a show of commitment, the four largest freight operators in the UK, marshalled a demonstration of electric and hybrid traction at Bellshill in Lanarkshire, Scotland. The site is presently the railhead for family run integrated logistics operation PD Stirling, and is fast developing into the Mossend International Railfreight Park. The new electrified terminal is the highest profile scheme among the initial tranche of ten projects supported by the Scottish Government’s Green Investment Portfolio.

Launching the portfolio at the Mossend MIRP, Scottish government cabinet member and economy secretary Fiona Hyslop said there was a huge global bankroll of green finance looking for investment opportunities. Projects like Mossend prove that the environmentally considerate rail freight sector is at the top of the list for attracting new capital. “We know investors need credible projects that reduce emissions to match their own green ambitions”, she told the audience of rail freight industry guests. “By assessing these projects before they go to market, the Green Investment Portfolio gives global investors the confidence they need to back projects in Scotland.”

The cabinet secretary was given a personal tour of the facilities by Andrew and David Stirling, representing the family owners. Showpiece of the tour was the unique line up of traction from GB Railfreight, Direct Rail Services, DB Cargo UK and Freightliner, the biggest general cargo operators in the UK. All four had provided examples of their workhorse electric motive power, with DRS showing off their latest hybrid traction.

Expansion plans, to realise the potential of Mossend International Railfreight Park, include eight new sidings, directly connected to the electrified West Coast Main Line. Those roads will be capable of handling a daily timetable of 16 trains, all up to the UK maximum permissible length of 775 metres.

Plans also include rail support and maintenance services, and the extensive facilities of the PD Stirling logistics operation. The terminal will be internationally trade compliant, capable of handling most cargoes, including certification for dangerous goods. The storage capacity of 5000 TEU will be serviced by electric handling vehicles, further enhancing the facility’s environmental credentials.

After touring the cabinet secretary around the facilities, David Stirling, director of PD Stirling, explained how the developing rail freight park at Mossend would not only be Scotland’s leading high-value dry port, but also address rail freight operations in a low-carbon economy of the near future. “We are fully supportive of the Scottish Government’s target to achieve net zero emissions by 2045 and indeed are contributing to this by providing Scotland’s largest zero-carbon, multi-modal rail freight park”, he said.

Shifting the current access gate for the terminal out of the local community, and on to a new road, connecting directly to the motorway network goes further than simply making life better for the neighbours. It also promotes modal shift, and that, says David Stirling, moves the facility and the industry in the right direction. “With future plans including Scotland’s first 775-metre electric rail terminal, we hope to benefit many local businesses as well as those based across Europe and beyond”, he said. “The Green Investment Portfolio is a valuable tool to help us reach out to global investors.”

Currently Mossend receives around eight trains daily, but with the International Railfreight Park online, there is potential for that to increase two-fold. As well as connections to many British ports, the operators have ambitions to be an export hub, dispatching trains via the Channel Tunnel.

With Scotland’s unique portfolio of products all within easy reach, that export aspect of the project struck a chord with economy secretary Hyslop, and provided opportunity to emphasise the greater impact of rail freight on the nation as a whole. “Working in partnership with business, we are committed to ensuring that economic growth promotes happiness and improves the opportunities, life chances, and wellbeing of every citizen in our country”, she concluded.