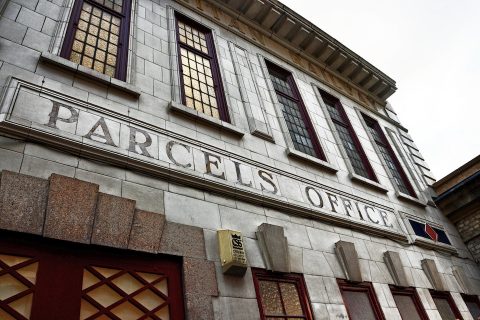 The UK is closer to a faster, greener version of the traditional parcels train. Several enterprises are racing towards trials and implementing services to answer the modern needs of business and consumers. The major passenger terminal in the City of London may be the first destination.

First hinted at back in November of last year, trials of a planned light goods delivery service are moving towards revenue earning service. Other companies have plans too. They propose to bring back traffic long lost to the railways in the UK, ever since the abandonment of the universal parcels service operated by the nationalised British Railways.

In a commercial effort to beat the ever more stringent emissions and congestion legislation in and around London, and possibly other UK cities in the near future, an offshoot from specialist operator Rail Delivery Group intends to run converted electric passenger stock between London Gateway terminal and Liverpool Street passenger station in the City of London, the recognised financial heart of the capital.

Reports in the UK trade and consumer press say the company, named Orion High Speed Logistics, will run three trains daily between DP World London Gateway port and the Network Rail managed Liverpool Street station, a distance of just 25 miles (40 kilometres). DP World recently announced a bid, jointly with Forth Ports Tilbury, for freeport status on the River Thames. If successful, that would certainly generate significant extra traffic to and from the ports.

While short distances under 100 miles (160 km) are generally regarded as marginal for rail freight, Orion are banking on the additional road costs and difficulties of navigating London’s congested streets. By using rail to reach the heart of the city, they believe that a last-mile road delivery really can be a ‘last mile’ and all but guarantee timely delivery.

The company is understood to be converting former passenger EMUs – designated class 319, and the tri-mode variant of the same design, the class 769. The units originally entered service in the late 1980s – ironically when nationalised British Rail still existed and offered their extensive ‘Red Star’ parcels service.

Other enterprises have their eye on reviving the parcels and light goods business. Most ambitious of them is Doncaster based Varamis Rail. The company has been examining a number of options, all around utilising similarly off-lease passenger EMU stock. Varamis already expects to be operating as a Crown Commercial Service supplier before the end of 2020. Varamis say they will be moving medical and vital supplies around the UK for Public Health England from November.

Varamis expect to be able to deliver between a London location and Doncaster in two hours, Newcastle in three, and eventually to Edinburgh in four hours, at speeds comparable with express passenger services. Given that their routing clearly proposes to use the East Coast Main Line, paths would necessarily need to be compatible with the existing busy passenger traffic diagrams.

While Orion proposes a high-speed shuttle, Varamis is planning for an eventual circular route, taking in both East and West Coast lines, and reaching as far north as Glasgow and Edinburgh. Operational differences aside, the two companies coincide in their environmental credentials.

Given the UK government commitments to greening the economy, zero-emissions logistics are clearly going to be a critical part of the plan. Long distance carriage and urban delivery by electric traction would seem to answer all the climate change questions asked of the logistics sector. In that respect, both Orion and Varamis appear to be ahead of the pack and very much ready to pass the parcel.