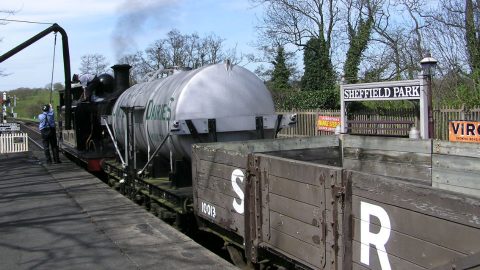 UK’s enterprise trains: freight for all and affordable

Could a version of the nineteenth-century local goods train be the answer to some very twenty-first century problems? Climate change, congestion charging, low-emissions zones, and HGV driver shortages may not have been issues in Victorian Britain, but in modern Elizabethan times there is an urgent need to find new environmentally-friendly ways to keep the wheels of commerce turning.

The cutting-edge technology that may save our cities from a Dickensian nightmare of clutter and climate, could be solution invented in those very same Dickensian times. What used to be the mainstay of freight operations around the country could be ready for a comeback in a very up to date way.

Hop on, hop off

In an echo of historical practices last seen in the 1970s, light goods will, next year, find their way into central London on dedicated trains. A highly-automated handling process will see mixed loads quickly delivered to local businesses in the area. All very historical, but there are a few modern twists. The loads originate from an intermodal service – containers straight off the deck of a ship at London Gateway port, and Instead of a long line of horse-drawn carts, a fleet of eco-friendly electric delivery buggies will do that last mile – or last 1.6km for the metrically if less poetically minded.

What’s more, trains of traditional short-wheelbase wagons won’t terminate at long-demolished goods terminals like Bishopsgate or York Way – two of London’s biggest in their day. They will be arriving on converted passenger multiple units, retrofitted to run bi-mode straight into the passenger platforms at Liverpool Street station in the heart of the financial district.

Loads from the past

Apart from bulk loads and multi-modal, Britain’s railway network had largely abandoned small load freight by the privatisation of the 1990s. The former state-run operator, British Railways, had latterly operated an extensive service alongside the passenger network (Red Star Parcels) as the only means for small goods consignments. Even though redeveloped Liverpool Street station is unrecognisable from those days, it will still be challenge to squeeze in additional train movements. However, there is potential terminal capacity on the horizon, once Crossrail takes some load off the main concourse.

While not proposing a resurrection of the walk-up parcels service, some industry insiders have ideas that would see goods traffic operate alongside the intensive passenger operations of today. Carlisle-based rail freight professional Eddie Pollock, business development manager for Direct Rail Services, says there is scope for rail to embrace a wider commercial audience. He has been looking at the upcoming trails in London, and sees possibilities to work alongside initiatives like the Scottish Government’s local development fund.

That package encourages businesses to build dedicated freight facilities, which in turn feed into the rail network. “Initiatives like funding freight facilities have their place,” he says. “But we could use central funds to make better use of existing infrastructure, and make goods by rail viable for a far wider range of business interests.”

On a larger, traditional scale, there are examples of business bringing new flows to rail. Next year, Highland Spring, bottlers of a popular range of mineral waters, will bring online freight facilities on their own land, which will take heavy traffic out of the Scottish village of Blackford and off a busy highway nearby. Moreover, they are seeking to encourage other businesses to use the facility too, maximising the commercial and environmental potential of the site.

Eddie Pollock though has in mind almost a freight for all solution. He proposes putting funding into manpower, motive power and rolling stock, which could then be used to visit existing railheads, and even passenger platforms and lineside loading points. “Let’s stop thinking in tunnel vision about what freight trains are,” he says. “Let’s make the concept more diverse.” Pollock’s enterprise trains would then follow timetabled routes, utilising existing infrastructure, to let local businesses have economically viable access to the rail network.

In essence, Pollock’s proposal brings the cost of rail freight down to within reach of smaller businesses. By contrast, the London Liverpool Street trials, organised by a consortium of rail, freight and port concerns, are all about the rising cost of doing business in the capital – principally those costs associated with road transport, and taking advantage of a market forced to seek more economical ways to do business.

Whether it is modern light goods trains connecting remote sidings with city-centre stations, or repurposed multiple units running from London Gateway to the City of London, goods trains that Queen Victoria and Charles Dickens would recognise may be with us again soon. 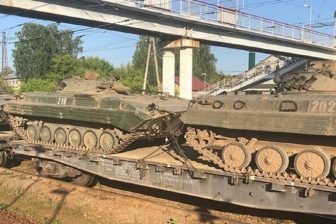 6 comments op “UK’s enterprise trains: freight for all and affordable”

InterCity RailFreight has been operating Red Star-style services on GWR and EMR services to and from London since 2011, winning a rail industry innovation award in 2017. Watch the GWR video at https://www.youtube.com/watch?v=52uJYUNIYEM

The solution described requires, to be a success:
– Focussed business model, rules on what is in/out of scope
– Defined network linking key hubs, can be expanded as business is won
– Regular trains between hubs – minimum daily service provides short lead time demanded by customers
– Frequent service to use equipment efficiently
– Reliable deliveries giving customers confidence to commit
– Visibility of system P&L giving a clear view on the cost implications of accepting or divesting business

A great article Simon and a very worthy discussion on opening up rail to wider customers. It’s great to see innovation looking back as well as forwards. Loving the Sheffield Park pic too. Shout out to all the volunteers on the Bluebell Railway. Just had the first Christmas Lunch of the year on the Golden Arrow Pullman last weekend. Sorry, nothing to do with the article.

The Adaptable Carriage design by 42 Technology which has been fitted to a Porterbroke owned ex-Thameslink Class 319 train for demonstration purposes,could be used,it can turn a passenger carriage into a frieght car by automatically moving the seats out of the way to make space for cargo.

I am excited to know the outputs and the resolution of some issues that occur. Affordable Websites for Small Businesses

Makes perfect sence. Somewhat going full circle when it comes to “local goods”. Dout we will go back to the days of Mixed trains. Or could we? With a 21st century twist?