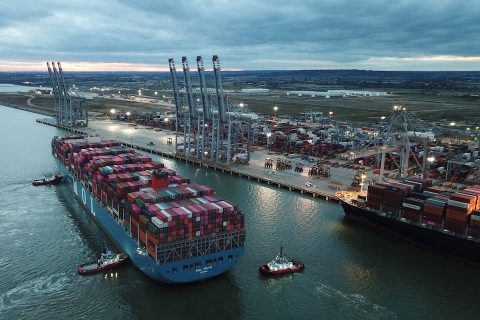 Two London port operators are to submit a joint bid for freeport status on the north bank of the River Thames. They have both told RailFreight.com how rail freight could be a beneficiary of the collaboration between two of the largest businesses in the sector. Forth Ports Group, the operators of Tilbury, and DP World who own the nearby London Gateway, are to pool resources on submissions to the UK government.

Two competing rail-served ports, directly serving London and the South East of England, are to work together on a free port application, under a recently announced government initiative. In a joint statement, the two operators claim that, together, their neighbouring operations make the Thurrock, Essex, location, downstream of London, one of the UK’s strongest port and distribution clusters. Consultants Vivid Economics will provide expert advice and economic analysis during the process.

Forth Ports Tilbury has already begun an extensive expansion programme. The port currently operates three railhead terminals within dock to support the handling of a range of freight trains. Their designated London Container Terminal (LCT) is popular with intermodal operators, and a purpose-built bulk cargo railhead supports the booming construction industry and the waste sector.

As already reported, later this year Forth Ports plan to open a new railhead at their Tilbury2 development. It will serve their new roll-on roll-off ferry facility, and provide access to distribution from a new construction materials and aggregates terminal.

As the company name implies, Forth Ports have their roots in Scotland, with the Port of Leith in Edinburgh as their base. However, the once extensive rail network in that port is largely dormant, and rail freight traffic is mainly concentrated further upstream.

The company has for some time operated inter-port intermodal rail services, and has gained extensive experience in the sector. “Our new port on the Thames, Tilbury 2, is already capable of accommodating full length trains and we have plans to significantly extend our capacity for rail freight at Scotland’s largest container terminal at the Port of Grangemouth”, the chief executive of Forth Ports Group, Charles Hammond, told RailFreight.com. “We are confident that having the infrastructure in place to transport both finished goods and raw materials by rail to and from our ports will further strengthen our bid for freeport status.”

The UK government says it wants to establish freeports, which have different customs rules than the rest of the country, as innovative hubs that boost global trade and attract inward investment. They also emphasise the desire to generate employment opportunities and benefit what they call some of the most deprived communities around the UK. Rail freight has been examined as a significant potential benefactor.

DP World share the UK government desire for enhanced employment opportunities. The company says it already extensively supports the local economy and job prospects. They say the area has experienced robust population growth over the past decade, but still lags behind the surrounding region in wages, skills and employment. “The opportunities unlocked by a joint freeport will create significant employment opportunities while delivering on the national levelling-up agenda”, says the company’s statement.

Freeport experience from both partners

DP World London Gateway represents the newest deep-sea container port in the UK, with the owners having invested over 1.5 billion British pounds (1.67 billion euros) in the project. Although the older Tilbury location enjoyed freeport status until 2012, DP World also has corporate experience in the field. The group set up and operates the important free trade zone at Jebel Ali in Dubai in the Middle East. The company is actively expanding around the world, most recently in acquiring a container port facility in Ukraine.

On the matter of rail freight, chief financial officer for DP World UK, Alan Shaoul, is a little more circumspect than his Scottish collaborator. “We very much hope that the government package on freeports provides additional financial support to encourage a modal shift onto rail”, he said, while adding a note of caution, and reflecting on the absence of a clear directive from the UK government. “Policy in this area has been quite silent so it is hard to give a steer until the policy is published in the autumn.”

What is certain is that the freeport proposals put forward have drawn a significant level of interest. By collaborating, Forth Ports and DP World believe they have the critical mass to sway a decision. The fact that both facilities are actively rail connected, which helps answer growing issues of congestion in the South East, and climate change in the world at large, can only help their economic case.