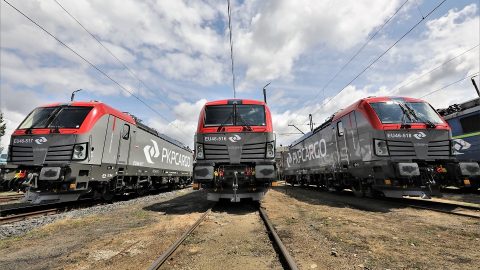 The Vectron’s story for PKP Cargo started more than five years ago. In September 2015 the Polish company ordered 15 Vectron multisystem locomotives from Siemens Mobility with an option for an additional five locomotives. According to the agreement, the first three vehicles were delivered to Poland in January 2016. The entire 15-unit order was fulfilled by Siemens Mobility in one year and a half. In January 2019 PKP Cargo booked five optional vehicles. They were supplied by the German manufacturer in a year.

“Vectron locomotives are unique vehicles that are able to cross European rail borders without stop, which helps to build a competitive advantage of PKP Cargo not only in Poland but also throughout Europe. Non-stop ride at the border means saving rolling stock and train drivers’ time, lower energy consumption and significant benefits for customers and the environment”, said Krzysztof Celiński, CEO of Siemens Mobility Polska, the Polish subsidiary of Siemens Mobility.

By November 2012, the rail freight operator had a fleet of nine vehicles of this type: eight units were rented and one was owned by PKP Cargo directly. With the purchase of Vectron locomotives, the Polish logistics company started to phase out EuroSprinter vehicles. As of today, PKP Cargo has only one locomotive of this type.

Besides the Siemens-made locomotives, PKP Cargo also purchases the vehicles produced in Poland. In the past two years, it ordered 34 electric locomotives from Newag, a major Polish rolling stock manufacturer. The first three vehicles of Newag Dragon type were delivered at the end of 2018. The other 31 units are split into several batches: seven locomotives should be produced and supplied in 2019-2020, 12 other units – in 2021 and the same number of vehicles in 2022.