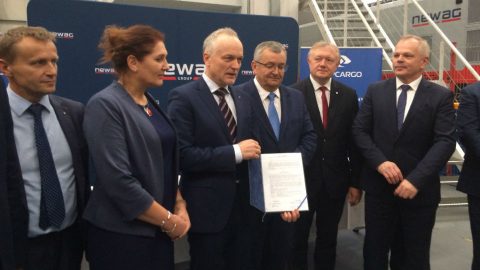 PKP Cargo, EU’s second largest railway freight carrier, will upgrade its fleet with three brand new locomotives Dragon 2. All of them were designed and produced by Newag, a Polish rolling stock manufacturer.

PKP Cargo has purchased three brand new electric locomotives Dragon 2, manufactured by Newag this summer. The agreement for 45.3 million zlotys (circa 10.5 million Euros) was signed on 25 October, in Nowy Sącz where Newag’s headquarters is located. The locomotives have already been produced and are waiting for to be approved by the Office of Railway Transport, the Polish railway supervisor body. The new units are expected to run on rails by the year’s end.

“Today’s agreement for the purchase of the electric locomotives Dragon 2 fits into our growth strategy. It is a milestone in upgrading our fleet, because the market needs it, the customers need it”, said Czeslaw Warsewicz, CEO of PKP Cargo. The company’s fleet consists of 1,272 diesel locomotives, 1,062 electric ones as well as 64,760 freight railcars (as of end 2017). Most of the locomotives were produced from the 1960s to 1980s, and they were modernised in the 2000s and 2010s. The last time PKP Cargo purchased brand new locomotives was in 2015, when the agreement with Siemens was signed for supplying 15 multisystem Vectons. All of have been delivered to PKP Cargo from January 2016 to May 2017.

The deal is a milestone for Newag too. “After more than thirty years, it is the first Polish six-axle locomotive, bought by the national carrier PKP Cargo. I am very proud of the fact that Dragon 2 locomotives with numbers 1,2,3 end up in the hands of PKP Cargo”, said Zbigniew Konieczek, CEO of Newag.

The Dragon 2 locomotive is the upgraded version of the Dragon units having been produced since 2009. “Dragon 2 locomotives use the latest, reliable technologies and provide high comfort to the driver. The main advantage of Dragon 2 is the very high tractive force”, noted Zbigniew Konieczek. Moreover, the locomotive is fully compliant with Technical Specifications of Interoperability (TSI 2014) and is equipped with ETCS level 2 safety system.

However, the customer did not accept the locomotives and the producer started to look for new operators for its units. Three of them were transferred to Orlen KolTrans, subsidiary of refinery holding PKN Orlen, two others to PKP Intercity, Polish national operator of long-distance and high-speed trains. On May Newag signed the 367 million zlotys (circa 84.8 million Euros) agreement with PKP Intercity for supplying 20 Griffins. The deal should be accomplished in two-and-a-half years.