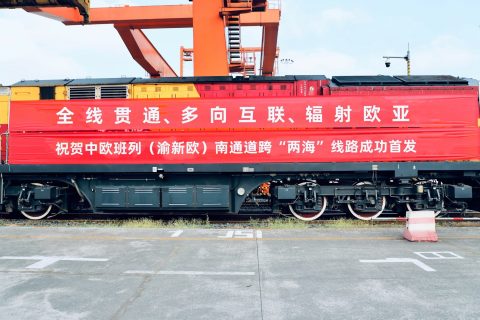 Nurminen’s train will follow the Middle Corridor route via Kazakhstan, the Caspian Sea, Azerbaijan, Georgia and Romania. Central Europe is not necessarily the train’s final destination since Nurminen aims to provide connectivity for Scandinavia via this route. Additionally, the company mentioned that the service could also boost container train services between Finland, Sweden and Norway.

Nurminen Logistics stressed the efficiency and agility characterising its new Trans-Caspian rail service. As the company mentioned, its response to the disrupted market was quick but well calculated. “Nurminen Logistics built the route in two months from scratch with the Kazakh railways. The process required strong confidence from China Railways in our operations and, above all, our customers’ trust in us”, said the Finnish firm.

The two parties signed their cooperation agreement on 16 March, marking Nurminen’s first attempt ever to transit through the Middle Corridor. Their ambition was to launch the first test trains between April and June and make the service commercially available with fixed timetables in September at the latest. However, it seems that they are well ahead of their planning.

In June, service officially kicks off

The first train dispatched on 10 May carried “containers with a wide range of products from European customers. The containers include components from various industries and summer products from jacuzzis to outdoor sports equipment”, said Nurminen.

A second train is already scheduled to depart on 25 May, with demand limiting available space. “There is strong demand for the new route, and the first train was full. The next train, which leaves on 25 May, is almost sold out, as there are only a few spaces left”, explained Nurminen. Nevertheless, customers do not have to worry since, in June, Nurminen plans to stabilise the service’s offerings by providing weekly departures via the Trans-Caspian route.