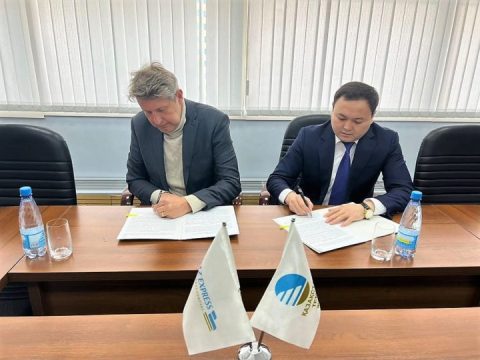 Finnish logistics company Nurminen Logistics and Kazakhstan Railways signed an agreement on commercialising the Trans-Caspian International Transport Route, also known as the Middle Corridor. The two parties plan to launch test trains through this route between April and June, while they also want to intensify their cooperation on the China-Finland route.

The agreement was signed on Wednesday, 16 March, and it marks Nurminen’s first attempt for transit through the Middle Corridor. The logistics company has a robust presence in the New Silk Road and is known for its connections from Northern Europe and Finland to various Chinese cities but also Japan, Vietnam, Korea and Singapore.

Nurminen provides both eastbound and westbound rail freight services, using mainly the Trans-Siberian route and the route from China via Kazakhstan and Russia to Helsinki and Kotka terminals in Finland. However, the situation due to the sanctions imposed on Russia makes business through the country more complicated. The cooperation with Kazakhstan Railways (KTZE) could provide some valuable solutions.

As Nurminen Logistics explained, the agreement was just signed. The two parties will start working on launching the first test trains that will run through Kazakhstan, Azerbaijan and Georgia to central Europe in April. They expect the tests to take place between April and June so that they will be ready to launch the commercial service until September at the latest. The European destinations included in this route are not announced yet. However, the testing period will also serve in understanding which are the most viable options to keep capacity and transit times efficient.

On top of launching services through the Middle Corridor, Nurminen and KTZE focus on cooperating on the route running between Finland and China. Specifically, Nurminen wants to use rail wagons registered in Kazakhstan and owned by Kazakhstan companies. In this way, the company will secure that the equipment it uses while transiting between China and Finland is not subject to any kind of restrictions or sanctions.