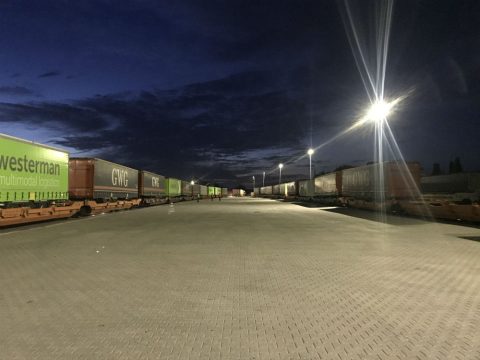 A direct rail freight service between Venlo in the Netherlands and Sweden was launched on 2 September. A dedicated blocktrain shuttles between the Dutch logistics hub and the Scandinavian cities of Malmö and Norrköping. They journey takes 24 hours and the trains depart on depart on Monday, Wednesday and Friday evening.

The shuttle is operated by Westerman Multimodal Logistics, while traction is provided by DB Cargo. The rail terminal of Venlo is ran by Cabooter Group. The first train carried huckepack trailers and all types of containers. However, Westerman also opens the train to third parties, both for (mega) trailers and all types of containers. In the future the service may be increased from 3 to 5 departures per week.

In addition to the connection to Sweden, the service also allows for an extension to Oslo. In Malmö, transshipment is possible to a daily blocktrain to the Norwegian city. This happens in the same terminal. The Malmö shuttle is operated by CargoNet. Thus, although not directly, Venlo is now also connected with Oslo, Westerman notes.

The service is an addition to the available rail freight options in the Netherlands, but also Belgium and the German Ruhr area. Niels van der Vlist, General Manager International, is satisfied with the new cooperation. “Cabooter has a strong position in Venlo and is building the new rail terminal at Tradeport Noord. As the European market leader for intermodal transport, DB Cargo has a strong position on the Scandinavian corridor.”

According to Westerman, the transit times are comparable to road transport on this route, making a shift to rail an interesting proposal. Moreover, the service is offered as a door-to-door package. “We want to surprise our customers with a fast, reliable, but also cost-efficient service. Add the sustainability aspect and the choice for this new service is quickly made!” Johan Logtenberg, CEO of Westerman added.