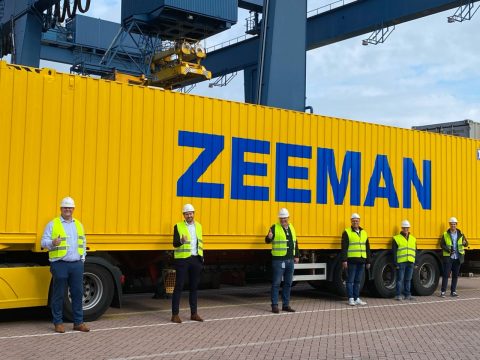 Starting this Thursday, Dutch fashion store Zeeman transports its products by rail to Granollers, northeast of Barcelona in Spain. For this, the retailer has partnered up with rail operator Shuttlewise and Combi Terminal Twente. The train service is offered once a week for now, but this frequency is expected to increase. Zeeman expects to be able to open another thirty to forty stores in Spain in the coming year.

Herjon Conen, Head of Transport at Zeeman: “We are starting this week with the transport of the first containers. This collaboration stems from a sustainability concept. We have recently also started driving gas trucks to achieve CO2 reduction. Ultimately, we want to move our things in the best possible way. In doing so, we not only look at CO2 reduction, but also at social responsibility.” In August of this year, Zeeman started using two Volvo LNG tractors.

The goods are transported from Combi Terminal Twente in Rotterdam, via France to Granollers. From there, the products are distributed to the center of Barcelona. “Our logistics partner does the distribution in Barcelona”, says Conen. Zeeman itself purchased a container chassis for the train services. “We like to keep things in our own hands”, he adds.

Zeeman and Shuttlewise started a trial last September to see how train journeys are going. “We came up with the idea of ​​transporting our products by rail when we saw that CoolRail Europe started running train services for Albert Heijn. We thought, maybe we can find a place on that train. We then entered into talks with Shuttlewise and started trial journeys.”

Because the test runs went well, the train services were included in the budget for 2020, says Conen. “But then there was a strike on the railways in France and COVID-19 was on the way. This has slowed things down a bit. But now we will finally start. ”

Zeeman has about 40 stores in Barcelona. Zeeman currently has one store in Madrid, but according to Conen, the intention is there to expand this further. “We are moving to thirty to forty new openings in Spain. That varies from the north to the south of Spain.” If the volumes are growing, Conen expects the number of train services to increase too. “Ultimately, the products are delivered in Spain via last-mile transport by a logistics service provider.

“The great thing about this project is that Zeeman goes to Spain with full containers and then returneds filled with the roll containers from the stores”, says Max Bonnet of Shuttlewise. “You don’t often see retailers transporting goods by rail. These parties often choose road traffic. It is a great development that they are now opting for intermodal transport and CO2 reduction. Perhaps we can shake up the retailers’ market with this. Zeeman is very innovative in this sector. ”

Zeeman was founded in 1967 as a supermarket with clothing and textiles at low prices. At that time there were few self-service shops in the Netherlands. The formula caught on and from 1974 the company grew rapidly through a number of large acquisitions. With the takeover of Brons in 1980, Zeeman suddenly became the largest textile discounter in the Netherlands. Zeeman has now grown into one of the largest textile supermarkets in Europe with 1,285 branches in seven different countries.